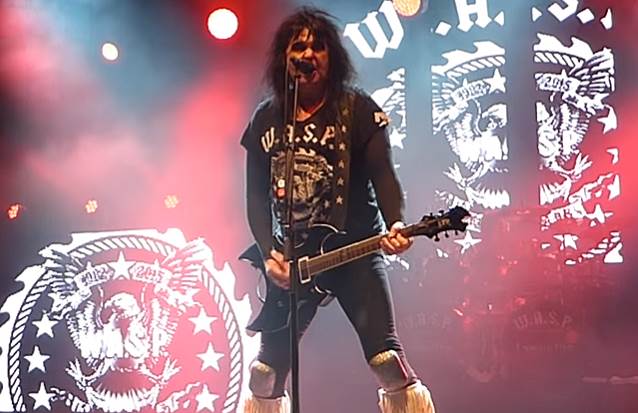 Fan-filmed video footage of W.A.S.P.'s October 9 performance at Kulttuuritalo in Helsinki, Finland can be seen below.

"Golgotha" was released on October 2 via Austria's Napalm Records.

W.A.S.P. frontman Blackie Lawless told Ultimate Classic Rock about the six-year gap between the release of 2009's "Babylon" and the arrival of "Golgotha": "That gap, we originally started in spring of 2011 and we went and did the 30th-anniversary tour in 2012 and then, the following May, I broke my leg pretty badly and we lost the rest of that year, so if you put it all together, it's about two years of work spread out. Those gaps in time, be them planned or unplanned, ended up being a good thing because it gave us the luxury of time I've never had before. We were talking about it a couple of months ago when we mixed the record. Had those gaps not happened, this record wouldn't have turned out the way it did. It gave us the ability to sit back and really question it and said, 'Is this what we want to do? Is this what we want to sound like?'"

Regarding the new song "Last Runaway", Lawless said: "Forty years ago I came to Hollywood as a teenager. Terrified and scared out of my mind, I had no idea what waited there for me. The song 'Last Runaway' is an intensely personal account of what happened to me, not only then but over the years and the success that followed after. Be it a kid looking for success in the music business or any life-challenging endeavor that someone would 'run away' from in life, I'm certain that everyone can relate to this story one way or another. It's another kid 'chasing the dream' and trying to survive it in the process. We've all been there."

Drummer Mike Dupke left W.A.S.P. in July 2015 after a nine-year stint with the band. He has since been replaced on the road by YNGWIE MALMSTEEN drummer Patrick Johansson and, more recently, by Randy Black (PRIMAL FEAR).