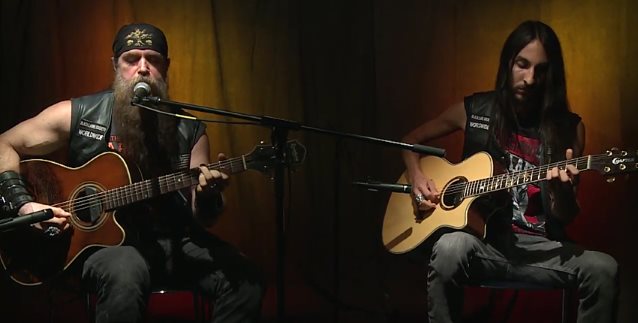 Zakk Wylde and Dario Lorina recently stopped by the HardDrive Radio studios to perform the song "Yesterday's Tears" from Zakk's "Book Of Shadows II" album. Check out the footage below.

Wylde is currently touring in support of "Book Of Shadows II". Wylde is hitting over 40 cities spread out across the U.S. and Canada this summer including a performance at Heavy Montreal festival in Montreal this past Sunday, August 7, a first for him as a solo artist.

"When we're doing the heavy stuff, which we love doing during a normal BLACK LABEL mass [concert], we'll still do some mellow stuff in the middle of the show, whether we do 'In This River' and other things, but then it's back to the heavy stuff," he told Billboard. "Once you get your fill of that, then you're like, 'I want to do some mellow stuff,' and then vice versa. Because I'm sure after we tour this record, it's going to be like, 'Man, I can't wait to do the heavy stuff.' So I really dig doing it. As much as I love listening to ZEPPELIN doing 'Black Dog', I also love them doing 'Going To California'."