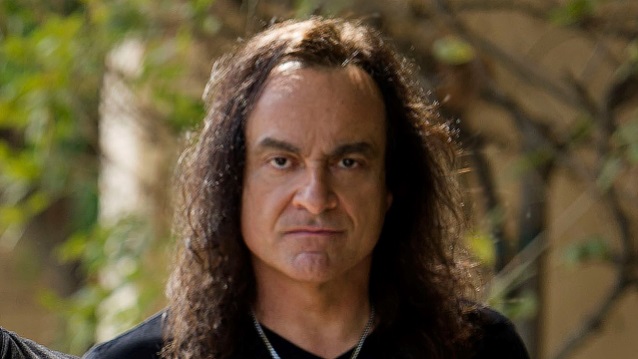 On the songwriting process for APPICE's debut studio album, "Sinister":

Vinny: "What we did was, we got some good friends involved in the record. Carmine actually wrote a song himself, 'In The Night', he actually wrote the whole thing. Then, the rest of them, the couple of them were some songs that I put together with a guitar player, Iggy Gwadera and we did an album together a couple of years ago called WAMI, with some people on it. It was really good. These were kind of songs that were going to be used for the next record, but we didn't do a next record. These songs were put together and they sounded great. I put drums on them, then I had bass put on them. But, a lot of them, I had the songs and I kind of edited it into an arrangement that works. Then we did riffs from [former OZZY OSBOURNE guitarist] Joe Holmes, who sent us a bunch of different riffs. So we put together what we thought worked. I was sitting in my studio, editing stuff together."

On whether the APPICE song "Monsters And Heroes" is about Ronnie James Dio:

Vinny: "It's absolutely something for him. It's finally a tribute to him, in a song, by people who worked with him and were best friends with him. Yeah, it was pretty touching. That's going to be the single and that's the video."

Vinny: "This was a technology-produced record. None of us played together. None of us played together in the same room except me and Carmine and the girls, the OKAI SISTERS, when we laid some basic tracks down, but the rest of it was all put together over the Internet. I've been doing this a long time, especially doing tracks over the Internet and I've got it down where I can put drums down on most songs and you can't even tell. Most of the time they are going to redo the instruments and my drums, but I get it so tight, that it sounds like it's finished with the drums.

On whether he thought thirty years ago that advancements in technology would allow him to record drums without actually playing with other musicians at the same time:

Vinny: "No. Years ago, what you used to do, you'd have to mail the masters. I remember we mailed reel-to-reel tapes, the big ones, too, over to England or something. What a hassle. Then you got to wait two weeks and hopefully it gets there without being destroyed. Just totally like 'The Flintstones' compared to now."

On how he and Carmine approached their individual parts for the album:

Vinny: "We're on a lot of the tracks, most of the tracks we're on together. We didn't just pick and choose through every song, we didn't do that. What we did do was, we sat down and listened to the songs. 'Why don't we do this one as playing together?' 'Do this one as you play the verses and I play choruses.' We mapped out how we're going to play; I'm on the left and Carmine is on the right of the mix. Sometimes when we're playing together if you listen with headphones, you'll hear two drums. Each song has a different approach."

On why now is the right time for he and Carmine to do an album together:

Vinny: "For the past few years, we've been doing shows live. We had a manager and we all thought it would be easier to book shows and sell the whole package if we had an album. We wanted to do one all these years, we just never had the time to really schedule ourselves because, fortunately, we're very busy. This was the time, when we talked about it, at the beginning of the year, we both had a lot of time off that we can sit down and start concentrating on this. And this is what happened. We had a great time."

"Sinister", the first joint studio album by Vinny and Carmine, was released on October 27 through SPV/Steamhammer as CD digipack, double gatefold vinyl, download and stream.