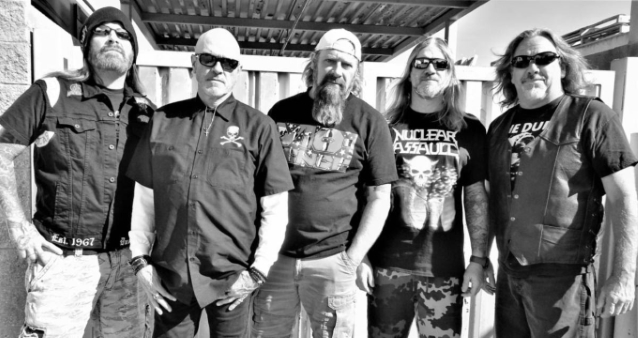 Reunited San Francisco Bay Area thrashers VIO-LENCE will release a new EP, "Let The World Burn", in early 2022 via Metal Blade Records. The effort was recorded at Trident Studios in Pacheco, California with producer Juan Urteaga, who has previously worked with TESTAMENT, MACHINE HEAD and EXODUS, among many others. Mixing duties were handled by Tue Madsen.

Singer Sean Killian comments: "Life is meant to be lived, and during that one life you have an opportunity to truly create memories for yourself and people who share the same time on this planet as you do.

"For 33 years, a creation called 'Eternal Nightmare' has been making memories for people around the world. Now, it is time to create some new memories in 2021, and VIO-LENCE has now done that for me, and I'm hoping for you too.

"This resurrection was started in 2019 with a simple text that stated, 'Let's do a show'. At that moment, these five original songs began.

"I am very proud of the new music we created, and we are fortunate to have worked with some very creative people. Juan Urteaga, who was able to push the band to the edge of insanity to capture the intensity we as a band have always brought to people through our music and our live performances. Tue Madsen put a special touch on our unique mania and brought raw perfection to our sound. Nothing too polished here, unless fragments of glass and broken razor blades are what you consider polished.

"I love to create, and we hope your heads explode when you hear the new VIO-LENCE. Thanks to everyone involved, and especially Metal Blade Records, for giving VIO-LENCE the opportunity to blow your minds."

In May 2020, guitarist Phil Demmel told EXODUS frontman Steve "Zetro" Souza's YouTube channel, Zetro's Toxic Vault, that VIO-LENCE was taking its time coming up with the best material possible. "When [the songs are] ready, they're ready," he said. "This [coronavirus pandemic] has given us more time. But still, it's gotta be fucking killer. I had a riff that the [other] dudes were kind of digging, and I'm all, 'I don't got a boner with this one.' I want a 10-foot boner with everything that we're doing now. It's gotta be better, it's gotta be fucking kick-ass… I don't wanna put out some crap."

In August, VIO-LENCE released a new digital single, "California Über Alles", a cover version of the DEAD KENNEDYS classic. The band also filmed a music video for the song with director Scott Kirkeeng.

The band performed its first comeback concert in April 2019 at the Oakland Metro in Oakland, California and spent most of the ensuing months playing select shows in the U.S. and Europe.