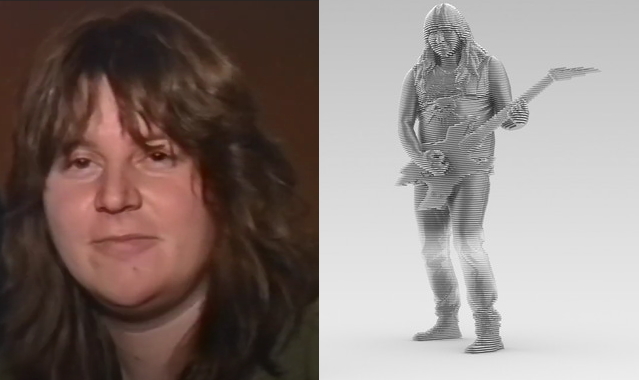 A new Kickstarter campaign has been launched to erect a statue of late VOIVOD guitarist Denis "Piggy" D'Amour in the band's original hometown.

The eight-foot-tall (2.5 meter) aluminum sculpture is being created by artist Fred Laforge and will be installed in the Jonquière borough of the city of Saguenay in the Saguenay–Lac-Saint-Jean region of Québec, Canada. It is located on the Saguenay River, near the borough of Chicoutimi.

D'Amour died August 26, 2005 in a Montreal hospital from complications of advanced colon cancer. The funeral services were held on September 1, 2005 in Jonquière and were capped off by a symbolic guitar-burning, with the remnants of the guitar being placed in the Sable river.

Only hours before he slipped into a coma due to complications from colon cancer, D'Amour gave VOIVOD drummer Michel "Away" Langevin instructions to go to the guitarist's personal computer and lift the final guitar tracks Piggy had been working on for a new CD. With enough material recorded for two albums, 10 songs made their way on to 2006's "Katorz", with the remaining cuts surfacing on 2009's "Infini".

When D'Amour died in 2005 from cancer, it seemed VOIVOD was very much a memory. Then three years later, the Canadian metal innovators surprised most by coming out of retirement to play the first Heavy MTL festival with a new-old lineup: original member Jean-Yves Thériault (a.k.a. Blacky) was back behind his blower bass and MARTYR's Daniel "Chewy" Mongrain was playing guitar.

At first what was assumed would only be a one-off soon grew to become a return to live action for the band. The next summer saw the band play almost every European metal fest and support DOWN on a cross-Canada tour and things just kept building from there. The metal world soon discovered that if there was one guitarist who could replace Piggy properly it was Mongrain, who proved show after show that he was up for the job.

D'Amour's unconventional brand of guitar playing was a staple of VOIVOD's sound, but Mongrain, a lifelong fan of the band, has injected his own personality into VOIVOD while retaining some of the hallmarks from D'Amour's playing.

VOIVOD's latest studio album, "Synchro Anarchy", came out in February via Century Media Records. The follow-up to 2018's "The Wake" was produced by Francis Perron at RadicArt Studio and features cover artwork created by Langevin.