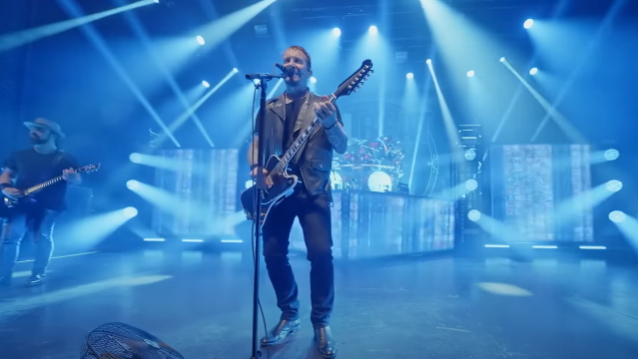 Danish/American rockers VOLBEAT have shared the live video "Shotgun Blue - Official Bootleg Live from San Diego" which was captured at the San Diego show on their recent 26-date "Wait A Minute… Let's Tour". The clip serves as a preview for "Volbeat - Wait A Minute… Let's Tour: Live From San Diego", a full concert stream that will be available for a limited time from Thursday, October 6 at 2 p.m. ET until Sunday, October 9 at midnight ET, on the band's YouTube channel. Capturing one of the band's first shows back on the road in autumn 2021, this intimate performance at San Diego's historic venue The Observatory North Park was filmed shortly before the release of their most recent album, "Servant Of The Mind". The setlist included some of the very first live performances of the hit singles "Shotgun Blues" and "Wait A Minute My Girl". The concert was filmed and edited by the team at Ghost Atomic Pictures ("Shotgun Blues", "Die To Live (Feat. Neil Fallon)", "Leviathan", Let's Boogie: Live From Telia Parken").

Revolver called "Servant Of The Mind" "excellent… the darkest and heaviest VOLBEAT offering yet." For the LP, the band, which consists of Michael Poulsen (guitar, vocals),Jon Larsen (drums),Rob Caggiano (guitars) and Kaspar Boye Larsen (bass),took its signature heavy metal, psychobilly and punk 'n' roll sound up a notch while showcasing Poulsen's keen ability for songwriting and storytelling. "Rarely has such a successful band sounded so ravenous," says Kerrang! magazine of the album.

Previously released single "Shotgun Blues" is an anthemic track in which Poulsen explores the ghostly events he recently experienced upon moving into a new home. Other songs on the album weave intricate and fascinating tales. "The Sacred Stones" tells the story of "an earthly being who has committed himself to the dark side. He is on a mission, speaking to darker forces and fallen angels." Meanwhile, "The Devil Rages On" looks at the idea of the devil taking human form. Album opener "Temple Of Ekur" returns to the ancient themes explored in past songs such as "The Gates Of Babylon", while the epic album closer "Lasse's Birgita" explores the story of the first witch burnings to occur in Sweden in 1471.