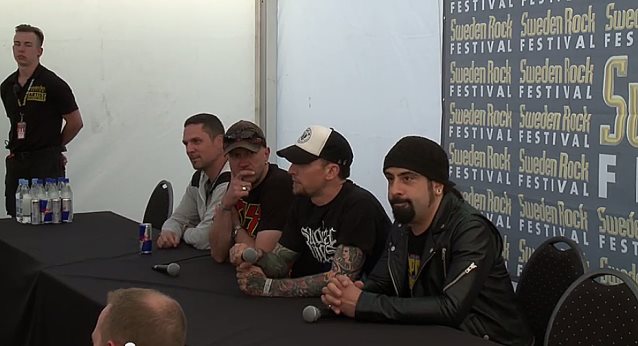 Danish/American metal rock 'n' rollers VOLBEAT took part in a press conference earlier today (Saturday, June 7) before their performance at this year's edition of the Sweden Rock Festival in Sölvesborg, Sweden. You can now watch video footage of the question-and-answer session below.

VOLBEAT and FIVE FINGER DEATH PUNCH are teaming up for a fall North American co-headlining tour, it was announced on May 6. The trek, which will also feature support acts HELLYEAH and NOTHING MORE, gets underway on September 15 in Salt Lake City, winding down on October 24 in Las Vegas.

VOLBEAT's latest album, "Outlaw Gentlemen & Shady Ladies", was re-released in a special "tour edition" on November 4, 2013. The new version of the act's fifth studio album contains new bonus tracks and a live DVD. The latter features footage of the group performing at a number of major summer festivals in Europe, including the Download festival in the U.K., Rock Am Ring and Rock'n'Heim in Germany, Hellfest in France and Denmark's Roskilde Festival.

"Outlaw Gentlemen & Shady Ladies" debuted at No. 1 in several countries when it arrived in April 2012, with the disc entering the Billboard album chart at No. 9.

"Outlaw Gentlemen & Shady Ladies" has sold more than 214,000 copies in the United States, according to Nielsen SoundScan.