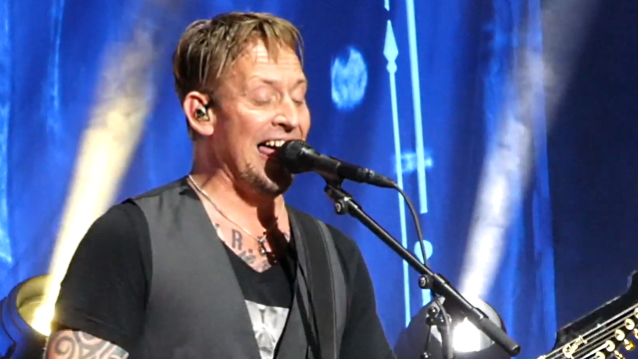 VOLBEAT Walks Off Stage In Belfast After One Song (Video)

Frontman Michael Poulsen and his bandmates reportedly made two attempts — within 10 minutes of each other — to play VOLBEAT's recent single "Pelvis On Fire" before walking off, leaving fans at Ulster Hall confused. It was later announced that the performance had been canceled.

Last night, VOLBEAT issued a statement via social media apologizing for the cancelation. They wrote: "As many of you know, Michael has been having some throat issues and we ran into multiple technical issues on stage that prevented the band from being able to hear each other play. While he has mostly recovered his voice at this point, it was decided that had he continued to play the show this way he would have risked blowing out his voice again and having to cancel even more shows. We're gutted that we weren't able to perform for you tonight, but we will be back to reschedule the show as soon as we possibly can."

Not everybody was understanding about the reasons for the concert being called off, with one fan questioning how support acts BARONESS and DANKO JONES were seemingly able to play through the technical issues.

"How did the two bands play before ok but Volbeat couldn't? So disappointing!," he said.

Another fan wrote: "DANKO JONES' sound was awful, through no fault of their own, but they battered through it and played a blinder. Sometimes that's what it takes."

A third fan took issue with the fact that the show wasn't called off earlier, with some fans traveling long distances to attend the gig.

"Well flying over from Newcastle for VOLBEAT turned out to be a disaster - half of one song and it gets cancelled due to technical issues," the fan wrote.

"To be fair if he was struggling with his throat, he could've cancelled yesterday, or came out and said that he was sorry himself or at least someone in the band explained the issues," another fan chimed in. "We were standing there for an extra 30 minutes with no idea what was going on."

Yet another fan added: "If it's technical issues it would have been spotted at soundcheck. How come both DANKO JONES & BARONESS played? DANKO JONES was absolutely class though..so good. Just so disappointed with the lack of explanation from VOLBEAT at the gig."

Last month, VOLBEAT was forced to postpone its concert in Bristol, United Kingdom due to illness.

The band is touring in support of its seventh album, "Rewind, Replay, Rebound", which was released on August 2 via Republic Records. The disc was produced by longtime collaborator Jacob Hansen and co-produced by Rob Caggiano and Michael Poulsen. This marks the first studio album with Kaspar Boye Larsen on bass.

Absolutely disgusted at the actions of @VOLBEAT tonight in @UlsterHall. 30 seconds into first song and the singer walls off stage. Wait 10 mins, gives us another 10 seconds then they're off again. No apologies, nothing!! Apparently the primadonna hadn't the right sound in his ear

@VOLBEAT cancelled in Belfast after half a song due to technical issues with the sound! Band just walked off stage and left everyone looking at this for 15mins with no updates. Incredibly poor. Fans deserve more than just a refund, be interesting to see if there's a statement. pic.twitter.com/n6ZTOYUoA3

How did the two bands play before ok but Volbeat couldn't? So disappointing!

The gig that never was @VOLBEAT gutted that we only got half of the 1st song, twice pic.twitter.com/dAj4XAvNHW