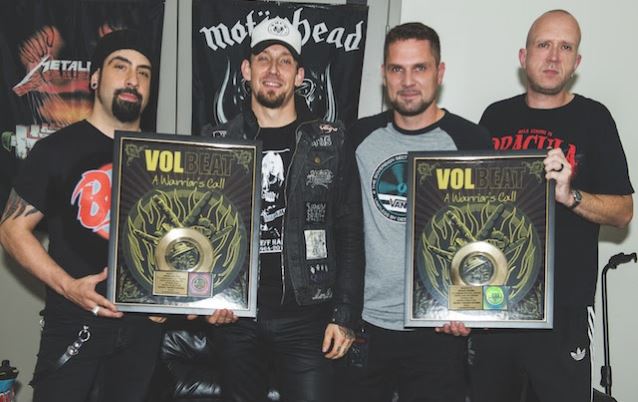 "A Warrior's Call", a song from from Danish/American metal rock 'n' rollers VOLBEAT's 2010 album "Beyond Hell / Above Heaven", has been certified gold by the RIAA (Recording Industry Association Of America) for sales of 500,000 copies.

VOLBEAT singer and guitarist Michael Poulsen states: "Jon, Anders, Rob and I are very proud of this acknowledgement. The fact that each and every sale is a gesture made by the fans that fill the venues, buy our records, and support rock music, this is truly meaningful. Thank you to each and every one of you. We share this moment with all of those that work on our behalf to support Volbeat globally, and with the fans who know rock music is alive and well."

Republic co-founder and CEO Monte Lipman states: "VOLBEAT has fought hard to become one of the most important rock bands today. Their drive, determination and amazing talent, continues to inspire us every day. We are thrilled with their success and congratulate them on this historic achievement."

In a 2010 interview with EspyRock, Poulsen stated about "A Warrior's Call" "'A Warrior's Call' is a typical VOLBEAT song, if you listen to it. It's a rock 'n' roll, boogie woogie song, typical vein of VOLBEAT but it's a song that I wrote for the Danish boxing champion Mikkel Kessler. Mikkel is the biggest boxer in Denmark and he was in this tournament called the 'Super Six Tournament' and he needed a song. He had been to some of the VOLBEAT shows and I had been to some of his fights, so we just started talking and I said, 'You know, you need a good song when you're walking to the ring,' and he said, 'Yeah, if you can come up with something good, let's work on it.' I had this idea for 'A Warriors Call' and Mikkel really liked it, so we were in the studio and we had him sing on the part 'Fight Fight Fight' and now he is walking into the ring with that song. I'm really proud of that since I'm a big boxing fan and a boxing fanatic and my father was also an old fighter. Every day, the first thing I do in the morning is load up the computer and go to FightNews.com."

Asked if the song has extra significance as his father was a fighter, Michael said: "Yes, it does. I think in the future there may be more opportunities were we might do more songs that are linked to sports. We still see a lot of commercials here in Denmark for racing cars were they use some of our songs in small seconds, so it seems like some of the VOLBEAT music fits into sports."

VOLBEAT lead guitarist Rob Caggiano told Soundcrave magazine in a new interview that the group will start working on its sixth studio album by next summer. Caggiano said, "We have been floating around some ideas. We will probably go back to the studio next year, maybe in August. We have some much-needed down [time] coming up. We finish this album cycle in November in the UK, then obviously the holidays and some family time. Next year, we will start getting into creative mode and start doing some stuff."