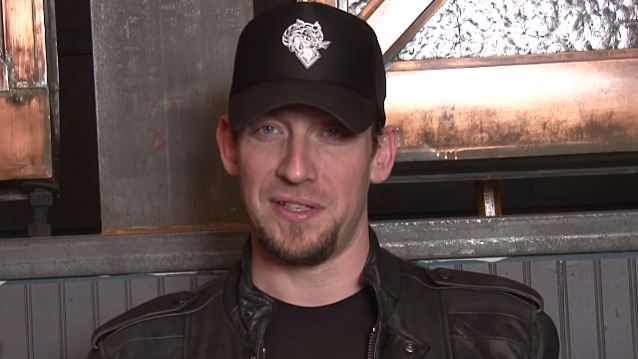 In a recent interview with Toddstar, guitarist/vocalist Michael Poulsen of Danish/American metal rock 'n' rollers VOLBEAT spoke about why he thinks his band's music has been so well received by American fans. He said: "I guess the American listeners and even the radio stations they can hear that it's a European band being inspired by American music. I guess somehow that has a charm. I know I'd like to believe that."

He continued: "You guys over here [in the U.S.] have so many great bands. You have a great music history. But it's a little bit weird when you turn on the American radio that a lot American bands sound pretty much the same. Very good songwriters and good songs, nothing wrong with it, but they're basically sound a little bit so much like the same.

"I guess [VOLBEAT] coming from small country like Denmark where I can hear that's definitely some American inspiration here, but it's also somehow something else. I guess maybe we were there at the right time where people over here needed something that's a little bit more different, that they take it as a compliment that they can hear that we're inspired by a lot of American artists."

Poulsen was also asked whether fans will have to wait another three years for a VOLBEAT studio album following 2013's "Outlaw Gentlemen & Shady Ladies". "No," he said. "The thing is some of the first records we did they were released very short after each other and very quick. That's fine too.

"Back in the days bands were releasing album every year, some bands were even releasing two records a year. But I can honestly say that we had been so busy on the road that it's been tough to find the time to go back to the studio. Just as we were planning on going into the studio, we were offered another tour.

"It is a tough business. Bands these days are not earning that much money on making records, they are making the money on the road. The road work. It takes a lot of time to, if you want to sell a record, you simply have to be on the road so people can recognize you. That goes hand in hand. At the same time, we've been very careful we do not overexpose ourselves when it comes to releasing album.

"A lot of my idols at a certain time they were releasing album almost, yeah, as I said, every year. It was almost too much to comprehend and swallow. It's like, 'Okay. I get that.' We'd rather have that our fans and stuff get a little bit hungry.

"It is fun, because when we go into the studio, those kinds of songs would have been done for a long of time and when we go on tour and we stand with this new record and we're signing, we get this question a lot from fans like, 'When are you going into the studio again?' It's like I just heard the door slamming to the studio we just left. I take that as a compliment. It is beautiful.

"But no, it's definitely ... We've been working with a new material and we're planning on going into the studio next year."

"Outlaw Gentlemen & Shady Ladies" has sold more than 250,000 copies in the U.S. The set features the No. 1 singles "The Hangman's Body Count" and "Lola Montez", as well as the Top 5 track "Dead But Rising" and new single "Doc Holliday".