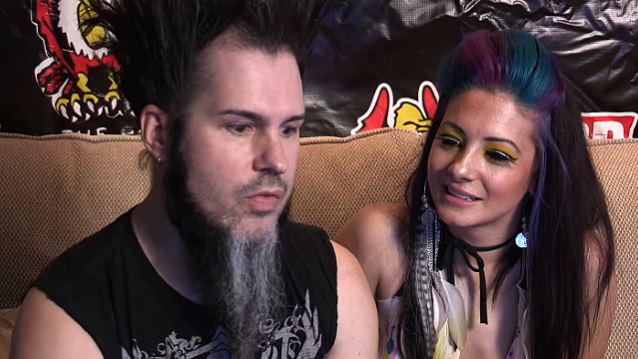 WAYNE STATIC's Wife: 'I Will Try My Hardest To Be Strong And Make Him Proud'

Tera Wray Static, the wife of STATIC-X frontman and founder Wayne Static, has released a statement expressing her gratitude for the support she has received in the two days since his death.

She wrote: "I would like to thank everyone on behalf of all the Wayne's family and myself for all the kind words from all of Wayne's friends and fans and other bands.

"Wayne went very peacefully in his sleep and probably didn't even know that it happened (which makes me feel better that he wasn't in pain).

"It will be sometime before we know why it happened but I will keep everyone informed.

"He had so much more to give the world.

Two former members of STATIC-X spoke out on Sunday about Static's death. Ex-guitarist Koichi Fukuda said in a statement, "I am still trying to process the sad fact that I’ve lost my dear old friend, Wayne Richard Wells. He was an extraordinary, one-of-a-kind, very special person and also a very gifted artist with a clear vision. On a personal level, he was a smart, kind, caring sweetheart and soft-spoken gentleman. I really loved his dark, biting and sharp sense of humor. We all shared so many great times and also some tough times together like we are 'family.'"

Fukuda added, "It makes me so sad and angry at the same time that I’ll never have a chance to reconcile with him. I thought the time is the only thing needed for all of us to realize what we had is something so special."

Meanwhile, bassist Tony Campos — whose relationship with Static grew particularly turbulent — wrote in a similar statement, "I knew Wayne for 15 years. Some of the best times of my life were with him. I considered him a good friend. It’s sad the way our friendship ended, but even more sad that we never got to settle things between us."

Campos continued, "Even though we were no longer friends the last five years, I held on to a sliver of hope that my old friend would come back."

STATIC-X broke up in 2010, shortly after releasing its sixth studio album, "Cult Of Static". The band reformed with a new lineup in 2012, then disbanded permanently in June 2013.

Wayne Static was just getting ready to head out on co-headlining tours with POWERMAN 5000 and DROWNING POOL when he died at the age of 48.

There has been no official confirmation of the cause of death, but some of Static's music industry colleagues suggested in their initial reactions online that drugs may have been involved.

However, a statement from a publicist associated with Static and his wife indicated that the singer and guitarist had kicked hard drugs in 2009, adding, "This is not a drug-related incident or an OD."