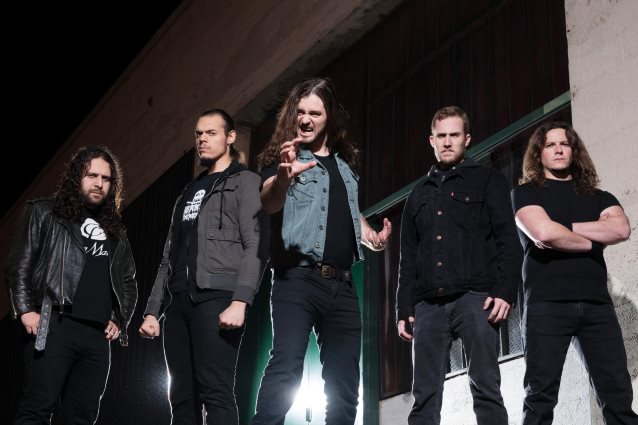 WARBRINGER: Entire 'Woe To The Vanquished' Album Available For Streaming

"Woe To The Vanquished", the fifth album from Los Angeles-based thrash metallers WARBRINGER, can be streamed in its entirety using the widget below. Due on March 31 via Napalm, the disc was produced and mixed by Mike Plottnikoff (FEAR FACTORY, IN FLAMES),mastered by Howie Weinberg (SLAYER, PANTERA),with cover art by Andreas Marschall (SODOM, BLIND GUARDIAN, OBITUARY).

WARBRINGER singer John Kevill, who is studying to be a history professor, explained the "Woe To The Vanquished" title: "The title 'Woe To The Vanquished' comes from early Roman history — before they were the huge empire they became. In 390 BC, a host of Gauls led by a warlord called Brennus attacked Rome, and captured all the city except the Capitoline Hill. From this hill, the defeated Romans made a bargain, they would pay 1,000 pounds of gold for the Gallic army to leave the city with no further bloodshed. The Romans bring the gold before Brennus, who uses his own scales to measure it. On the Gaul's scales, the Roman's thousand pounds of gold measured to be less, which led the Romans to complain that the scale was rigged (it probably was). Responding to this, Brennus speaks 'Vae Victis' (Woe To The Vanquished) and throws his sword on the counterweight. Because the Romans lost, they have to pay the rigged sum of gold as well as the weight of the sword, to add insult to injury. The irony here is that vowing this type of humiliation would never happen again, Rome went on to become an ancient war machine conquering and subjugating most of the old world. On the record, 'Woe To The Vanquished' is spoken in an ironic, mocking tone — the defeated are trampled and time marches on, uncaring, and forgets they ever existed."

He added: "One of the great things about heavy metal as a genre is you can express tougher subject material than 'I met a (boy/girl) and it was (happy/sad).' I looked for the most monolithic evil I could find to write about with this destructive, intense music... and I did not have to look any further than reality. Forget Satan, that's a children's story. Real evil is in the hearts of men."