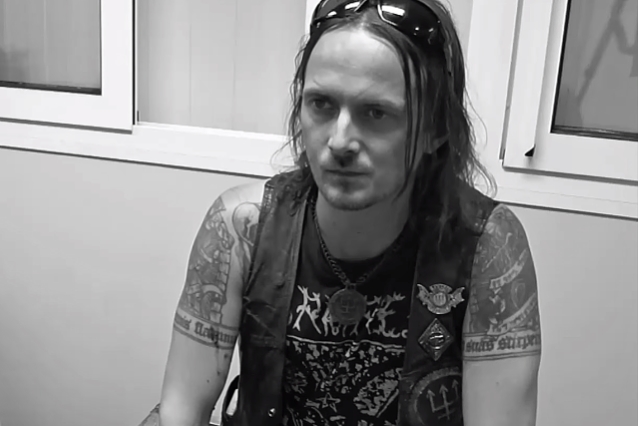 Frontman Erik Danielsson of Swedish black metallers WATAIN says new touring guitarist Hampus "H. Death" Eriksson "belongs to the unique little race of people who are just total diehards" and that the band is "lucky to have him." Eriksson has replaced Set Teitan, who stepped away from WATAIN earlier in the year after a photo surfaced of him giving the Nazi salute.

In an interview with Rock Hard magazine's Mandy Malon (see video below) at this year's Party.San Open Air, which was held earlier this month in Thüringen, Germany, Danielsson was asked about Eriksson (also of Swedish death metallers DEGIAL) and how he is fitting in with WATAIN. "Hampus is from our hometown and we've known each other since, at least since he was pretty young," Erik said. "We were still kind of young, but we've known each other for many years. What can I say? We would never bring anyone into the picture that is not relevant for the task. Hampus, he belongs to the unique little race of people who are just total diehards, that have black and death metal running in their blood. They're not easy to find. Yeah, we're lucky to have him with us, absolutely."

Danielsson was then asked if the stories were true that he once lived in a rehearsal room with Dave Lepard, the now-deceased frontman for Swedish rockers CRASHDÏET. "Yeah, that was a long time ago," Erik said. "But yeah, Dave was a very good friend of ours and kind of, I would say, in a way, quite formative in how WATAIN was in that particular time. He was a real hellraiser in the true sense of the word. He kind of dragged us into it. He was very good like that. He was not afraid of anything. He showed us that kind of attitude can get you pretty far. Yeah, an interesting fact that the same rehearsal room you're talking about is now back in our hands, or at least back in our circle of people in Uppsala, so we kind of remade it to what it looked like back then. We've had some shows there every now and then. It's a place full of very intense memories."

Asked how he deals with death considering both Lepard and former WATAIN touring guitarist and THE DEVIL's BLOOD mainman Selim Lemouchi have passed, Erik said: "That's a little bit too much of a private matter for a backstage room at a festival. You deal with it. Whether you want to or not. That's pretty much all I can say about that right now."

The band will headline an autumn European tour with ROTTING CHRIST and PROFANATICA in support.