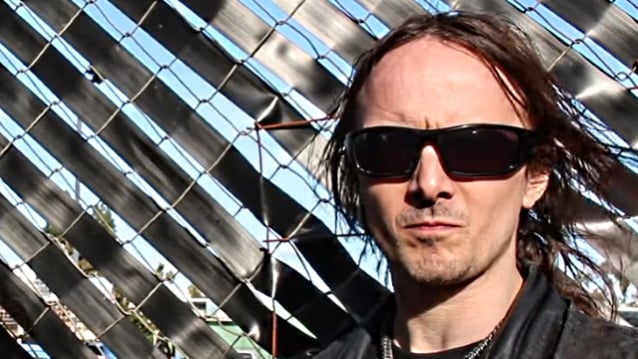 WATAIN's ERIK DANIELSSON: 'I Don't Mind Any Type Of Reaction, As Long As It's A Strong One'

WATAIN vocalist/guitarist Erik Danielsson recently spoke with Australia's "Scars And Guitars" podcast. The full conversation can be streamed below. A few excerpts follow (as transcribed by BLABBERMOUTH.NET).

Erik: "It feels like a well-received album. You're always a bit biased, because what I see is the face of the crowd in the front, and they're usually not yawning. It's been a very good album to tour with, and one of the albums that feels very uncomplicated. It's a straightforward album — that was the whole point — and compared to the 'The Wild Hunt', which was of a different nature, this one was very empowering, and good to tour with."

On whether he felt "proud" when "The Wild Hunt" entered the Swedish album charts at No. 1 in 2013:

Erik: "Yeah, I suppose. It means that you're doing something that has an impact, and I think for me as an artist, that's the accomplishment. I don't mind any type of reaction as long as it's a strong one, and as long as it can be felt. I suppose these chart positions and so forth, they played a role in determining that as well of course, but I'd be lying if I say that that's my main point of focus when I think about achievement. But, of course, it has its merits, absolutely."

On the group's forthcoming tour of Australia and New Zealand:

Erik: "One of the things we've been struggling with, and one of the things we're always struggling with when we're going that far and traveling by plane is that we can't bring the truckload of hell machinery that we do when we are touring in Europe and the States. There's of course going to be traditional WATAIN show elements, but it's definitely going to be more intimate settings. It's going to be a compressed type of show, which I personally look forward to immensely, because I'm getting a bit weary of always relying on a huge stage production. I kind of miss doing things a little bit more simple — or at least, it's nice to have both of those things... [It's going to be] WATAIN in a much more primal, primitive setting. I really look forward to that."

On whether the group would ever consider working with a "big-name" producer:

Erik: "It's definitely on our manager's radar. [Laughs] For me, by the time we decide who we're going to work with, I always need to be at the point where the album is completely done, and we all have a pretty clear vision of what it is we want to do. So far, those visions and those ideas, they have all corresponded really well to how [longtime producer] Tore [Stjerna] works. One of the things that happens when you work with the same producer for each album is that you buy yourself quite a lot of time, but also you don't have to go through the whole turbulence and mind-boggling business of trying a new creative person into your world. With a band like WATAIN, we tried a few times working with other people, but we like to stick to our own circle of people, and we like to keep things within our realm. I'm completely open for other collaborations as well, and I would definitely be interested in seeing what would happen if you would take the WATAIN spirit and put it to a different kind of machinery. We haven't done that yet, [but] we'll see what happens."

On touring the United States:

Erik: "The tours in the States are wild. They're super-unpredictable. You get from one place to another, and they're totally different. You can play at a small club one day and a huge theater [another] day. It's vast, and it opens up for a lot of mischief and a lot of turbulence."

Danielsson recently told Heavy magazine that the group is already plotting its next album. "We're definitely hungry to write more material," he said. "'Trident Wolf Eclipse' was, to a certain extent I would say, a lot about getting a lot of shit out of the system – a lot of ideas that had been lying around [and] a lot of things that we just wanted to get out there and then. Once that was done, my fingers, at least, immediately started itching for writing new stuff. That's definitely in the crystal ball."

WATAIN is currently touring Latin America. The group's tour of Australia and New Zealand kicks off February 22 in Melbourne.