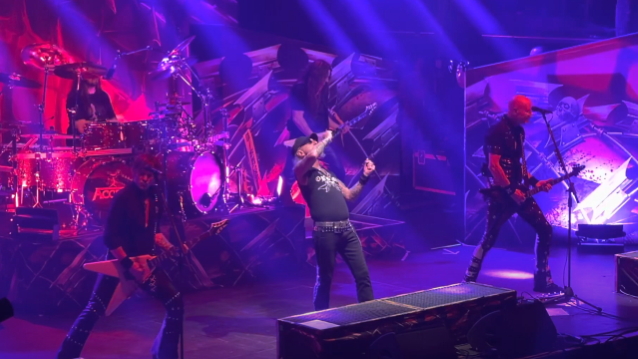 Fan-filmed video of ACCEPT's January 22 concert at Razzmatazz in Barcelona, Spain can be seen below.

In a recent interview with Made In Metal, ACCEPT guitarist Wolf Hoffmann was asked if there are any plans for him and his bandmates to celebrate the 40th anniversary of their classic album "Balls To The Wall". He responded: "We've always stayed away from it in the past because we've always been so busy with working a current album or a new album. Five minutes ago [in this interview] you asked me about a new album [from ACCEPT], and now you ask me about [celebrating an] anniversary [of a previous LP]. So I can't do both. I have to [make] a decision [which way to go forward]. And usually we've gone with, 'Hey, let's make a new album. It's time for a new album.' And then we tour this album. So there's never been enough time to do all these anniversary tours so far. But that doesn't mean we won't do 'em one day."

Hoffmann previously dismissed the idea of performing a classic album like "Restless And Wild" or "Balls To The Wall" in its entirety, telling Metal Eye Witness in a 2018 interview: "Probably not. I mean, I've never been a huge fan of this whole idea. It seems to me like a marketing gimmick more than anything. Because in our age, we could have an anniversary every year. 'Cause it was 35 years [ago that] 'Restless And Wild' [was released], 40 years ago this, 30 years that — every year would be another anniversary — and, to be honest, we're so busy with promoting our current stuff that we don't really feel the need to do all that nostalgia stuff. Every year we have a new album, or every other year, and we've made four albums and a live album, so that's five, and I made a solo album — that's six releases in eight years. So I don't think we need to bother with any anniversary stuff at the moment. Maybe one day when we have nothing else, no other ideas. And we've done, actually, one show once where we played a complete album, and it was okay. But, quite honestly, I think we have a perfect setlist of old songs and new songs. I wouldn't rule it out, but at the moment, I've always said, why bother?"

Controversial at the time for its cover and some of the album's themes, "Balls To The Wall" was also ACCEPT's greatest commercial success, reaching No. 75 on the U.S. Billboard chart. "Balls To The Wall" was certified gold by the RIAA (Recording Industry Association Of America) for shipments in excess of half a million copies, partly off the back of the heavy rotation the title track's video received on MTV.

Taking much of its inspiration from the likes of fellow German hard rockers the SCORPIONS, as well as a debt to U.K. metal legends JUDAS PRIEST, ACCEPT at the time was fronted by the inimitable Udo Dirkschneider on vocals, backed by lead guitar heroes Hoffmann and Herman Frank and the backbone of bassist Peter Baltes and drummer Stefan Kaufmann.

Hoffmann is the sole remaining original member of ACCEPT, which he formed in 1976 in the town of Solingen, Germany with Dirkschneider and Baltes.

ACCEPT's latest studio album, "Too Mean To Die", was released in January 2021 via Nuclear Blast. The LP was the group's first without Baltes, who exited ACCEPT in November 2018. He has since been replaced by Martin Motnik. ACCEPT's lineup has also been expanded with the addition of a third guitarist, Philip Shouse, who originally filled in for Uwe Lulis during 2019's "Symphonic Terror" tour, before being asked to join the band permanently. 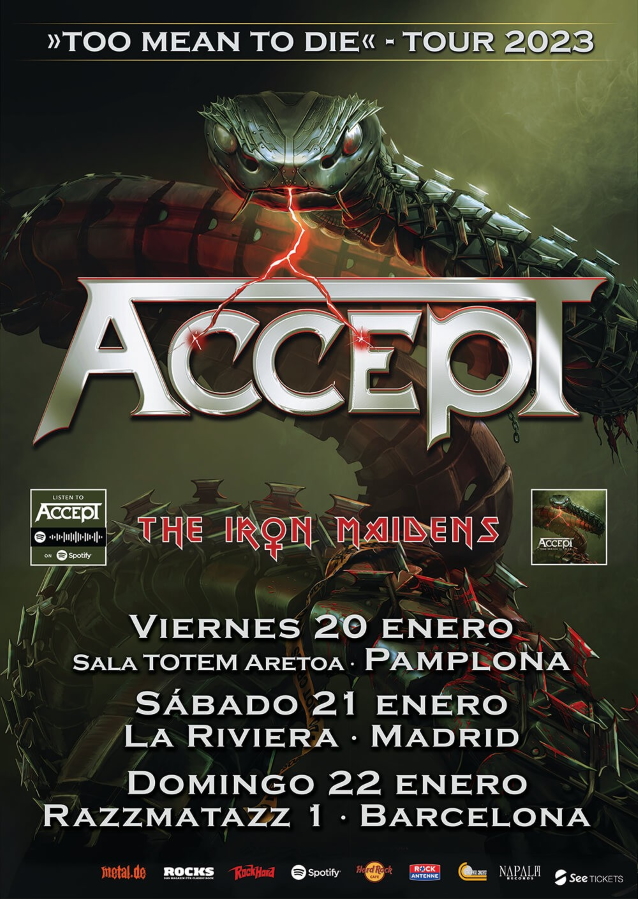