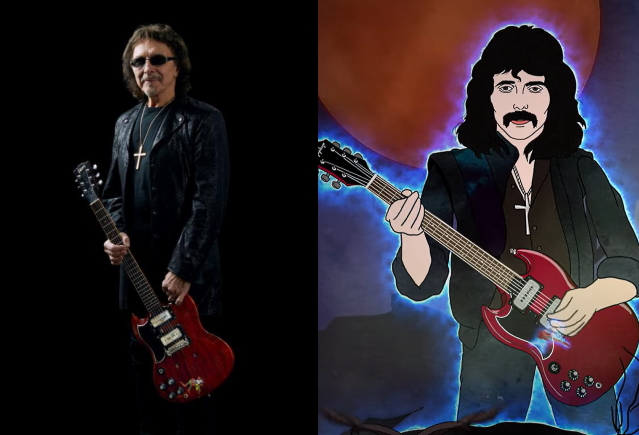 BLACK SABBATH guitarist Tony Iommi's iconic riffs, heavy tones, and innovative tunings set him apart from the rest and defined the heavy metal genre. At the center of it all was Tony's heavily modified 1964 Gibson SG. Inspired by Iommi's original Gibson SG, Epiphone has released the Tony Iommi SG Special.

This artist model is available in right and left-handed versions and features a two-piece mahogany body, a bound one-piece mahogany neck with a rounded profile, an Indian laurel fretboard with 22 frets, a Graph Tech nut, Grover Rotomatic tuners with contemporary style buttons, and chrome-covered Epiphone PRO P-90 pickups that are wired to CTS potentiometers and Orange Drop capacitors. A static cling reproduction of Tony's "Monkey" sticker is in the included hardshell case.

Instantly identified by the cartoon monkey sticker, Iommi's 1964 Special SG became the main instrument when the bridge pickup on Tony's white Stratocaster failed after BLACK SABBATH recorded "Wicked World" on the "Black Sabbath" album. It was not, however, without its problems. Due to the thin neck profile at the heel, there were always tuning stability problems and the single coil pick ups were always susceptible to picking up interference.

The guitar was donated by Tony to the Hard Rock Café organization and is on display at the Times Square location in New York City.

Speaking to Guitarist magazine, Iommi stated about his original guitar: "All the first four or five albums it was used on — and bits on the others after that. Eventually, I retired it, because I was worried about taking it on the road. 'Cause it used to always travel with me in the room, and I'd never lose sight of it — I wouldn't leave it on its own, you know, in case somebody nicked it. Because that was — for me, I couldn't just pick up another guitar; it had to be right. So it was really precious for me. And I was really worried about it, if I left it in a room and if somebody took it. 'That's it. I'm finished. No gigs.' 'Cause I didn't have a backup of it.

"I was always very careful with it — I mean, I really was," he continued. "On the flights, I'd always have it with me. Which is another thing — later on, you couldn't take 'em on the plane and stuff like that. So eventually, I retired it. And I felt sad about it being stuck in a case, really, at home. And that's where the Hard Rock [Café] came in. I thought it'd be better if people could see it in a showcase than me having it tucked away with another load of guitars in a box, you know?"