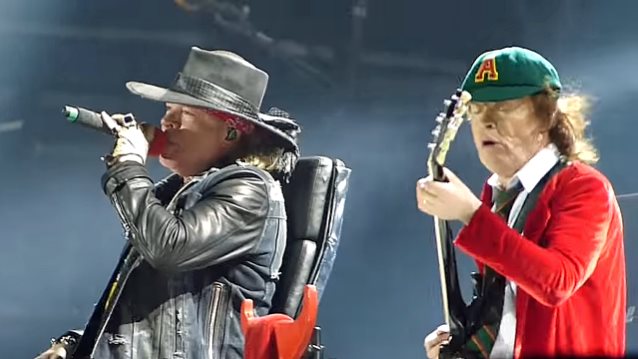 GUNS N' ROSES singer Axl Rose made his live debut as the temporary frontman for AC/DC on Saturday night (May 7) in Lisbon, Portugal, and by all accounts Rose delivered a triumphant vocal performance as fill-in for regular vocalist Brian Johnson even if he was still confined to a chair onstage due to the broken foot he suffered during a GUNS show last month.

The band opened the night with "Rock Or Bust", the title track from the band's latest album, and the 22-song set contained expected staples like "Shoot To Thrill", "Back In Black", "Dirty Deeds Done Dirt Cheap", "Thunderstruck", "Hells Bells", "You Shook Me All Night Long", "T.N.T." and "Highway to Hell". But also aired was a handful of somewhat more rare cuts, such as "Given The Dog A Bone", "Rock ‘N’ Roll Damnation" — last performed in 2003 — and encore "Riff Raff", which has not been played live by AC/DC since 1996.

According to Rolling Stone, Axl was not just in fine vocal form but in a good mood despite still being confined to a seat, with the singer described as "a deferential and pleasant presence between songs and an energized, brooding one during them."

He self-deprecatingly introduced "Shot Down In Flames" as "a song they wrote about my life story," led chants of "Angus! Angus!" and changed the lyrics of "You Shook Me All Night Long" to "Knocking me out with those Portuguese thighs."

During an interview with BBC 6 Music's Matt Everitt, Rose stated about his plans with AC/DC after the European shows: "There's makeup dates in the States, and if I don't get throw out before then, I'm looking forward to doing [them]. I think after that, it's about what they wanna do. I'm in if they want me in, and we'll sort it out, but right now that's getting ahead of ourselves with everything else that's on the table."

AC/DC guitarist Angus Young told NME in a separate interview that the band "had to act" immediately after learning that Johnson wouldn't be able to finish the tour. "It was a crisis that came then," he said. "We were in Miami at the time, when all of this came up, and unfortunately, when you're in that situation, you've got to make decisions pretty quick, because there are a lot of people waiting. We were supposed to actually play in Atlanta, so you're kind of going, 'What do we do now?' Because of the nature of Brian's deafness, we knew that there was no easy fix. So you've got to then say, 'What do we do here?' The options were very limited, and you think, if we just stop with all of this machinery, it's going to be a hell of a lot of legal entanglement."

Asked if they ever considered pulling the shows, AC/DC bassist Cliff Williams said: "We wanted to finish what we'd started."

Added Angus: "And that was our main goal, especially Cliff and myself, being there the longest. We wanted to complete what we had started. And I mean, you can't call a tour 'Rock Or Bust' and then go bust!"

Angus also talked about a possible AC/DC future with Brian Johnson. He said: "[Brian] has to be very careful of what hearing he's got left. This is what he told us. He was gutted about not finishing [the tour], because he says he would have loved to have gotten through. It was his call, what he wanted. He made that decision himself. He didn't want to be deaf. And I perfectly understand that; when you stop doing this, you want to walk away with all your pieces! I don't even want to leave without my fingernail!"

For the Libson show, Rose was still confined to a throne after snapping his metatarsal bone while singing during GUNS N' ROSES' Troubadour reunion show on April 1. It is the same custom throne Dave Grohl used last year for FOO FIGHTERS concerts after breaking a leg.

Asked how his recovery is going, Axl told BBC 6 Music: "I think we're about halfway there. I feel good. I've only started walking on a little bit on it the last few days, and now I'm starting to put weight on the front. It's inconvenient, but it's also helped me focus on the singing in another way. Other people are, like, 'How do you do that sitting down?' And I'm, like, 'It's a lot easier than standing up.' But I feel like an idiot; I do. I mean, I've done GUNS shows and I feel like a moron sitting there. But I have to ignore that and just get into the songs and do my best on the songs."

Rose met with AC/DC twice in March, in Miami and Atlanta, about doing the shows. Singers from AC/DC tribute acts were also auditioned, and at one point there was talk of having other vocalists alternate with Rose.

Despite a large negative reaction from fans to the collaboration, England's Metal Hammer magazine has listed several reasons why Rose fronting AC/DC is a "brilliant idea," saying, "Anybody who's watched GUNS N' ROSES' version of 'Whole Lotta Rosie' on YouTube must grudgingly admit that he riotously delivers the punch and snarl of the original. There is no debate that Axl has the style and the range to handle the band's current set list."

The magazine added that the eccentric GUNS frontman is "possessed of high intelligence and his own keen survival instinct. No way will Axl blow this."