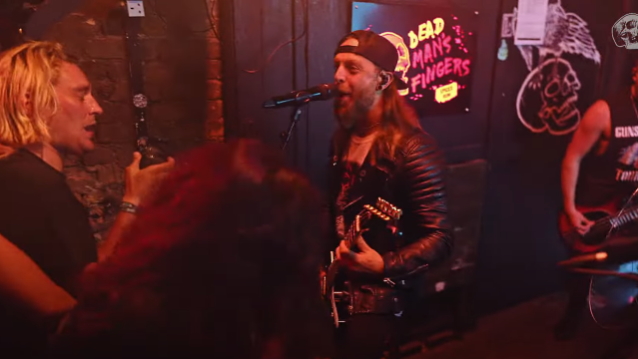 On May 23, Welsh metallers BULLET FOR MY VALENTINE played at a special concert at a London dive bar, Blondies, as part of Kerrang! magazine's "The K! Pit" series. Professionally filmed video of the performance, which was attended by "50 of BULLET's biggest fans", can be seen below.

BULLET FOR MY VALENTINE will release a deluxe version of its current, self-titled album on July 8 via Spinefarm/Search & Destroy. This extended release features four brand new tracks, plus "Stitches", a song previously only available as a Japanese exclusive. Following the CD and digital releases, a vinyl pressing will launch on November 11.

"Bullet For My Valentine" arrived in November via via Spinefarm/Search & Destroy. The LP was written beginning in September 2019 with longtime producer Carl Bown, who co-produced the band's 2015 album, "Venom", and produced and mixed 2018's "Gravity".

BULLET FOR MY VALENTINE recently announced a U.K. tour for early 2023. The run of shows will kick off on February 27, 2023 at Cambridge Corn Exchange, and will make stops in Bristol, Liverpool, Newcastle, Glasgow, Leeds, Birmingham and more before wrapping up in London at the Roundhouse on March 11. They will be joined by special guests JINJER and ATREYU.