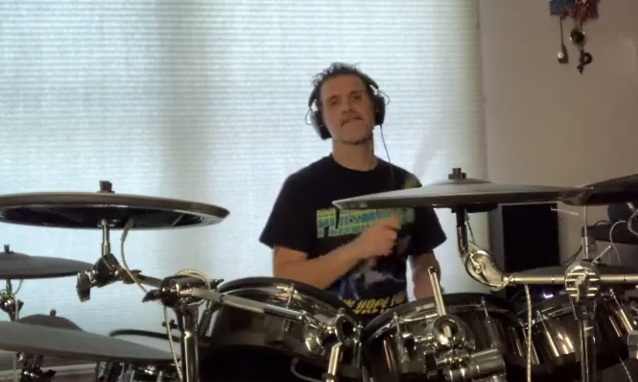 A short video of Charlie Benante putting down drums on a demo version of a new ANTHRAX song can be seen below.

Charlie shared the clip on his Instagram, writing in a caption: "Beating the beat down for a new demo #anthrax 2021'ish".

Last November, ANTHRAX guitarist Scott Ian told "Whiplash", the KLOS radio show hosted by Full Metal Jackie, that he and his bandmates likely won't release any music until the coronavirus pandemic has subsided and they are able to tour in support of the effort. "That's where I am personally right at this moment," he said. "Six months from now, who knows where the world is gonna be? We don't know. Maybe things will be closer to being back to normal; maybe they'll be further away from back to normal. Nobody has an answer to this, so anytime someone asks me about that, I really don't have an answer.

"In my brain, I don't wanna put a record out until I can play shows," he continued. "That's what I wanna do, but, of course, I don't control the world and I don't control what's gonna happen with COVID. I think I can safely say we will certainly be ready to make a record [in 2021]. So I think we will probably go do that once we're ready to go do it. There would be no reason to have a record [written] and then just sit around and not record it. So, I think once we actually feel like we're ready to go into the studio, we'll do that, regardless of where things are at on the planet, and then just take it from there. At least it'll be in the can, and then we'll be able to make a decision on what the best course is for us to take at that point.

"[Everybody is] in the same boat. There's no rules anymore. It's a completely different playbook, and everybody's gotta figure out what's gonna work."

Asked to describe the musical direction of the new ANTHRAX material, Scott said: "It's always hard for me to answer that, because it's more ANTHRAX songs, 'cause it always just sounds like ANTHRAX to me. And I don't really go much deeper than that. If I had to describe it, let's say comparing it to the last record, it's definitely riffier. There's more riffs; the songs have more riffs, I feel like, than the last record. There's already definitely more uptempo and fast stuff, but then again, we also aren't finished writing. That doesn't mean the fast stuff we've written is gonna go away. We're gonna probably write more songs, and then we'll see what the album's gonna be. But it's definitely riffier, and I think it's definitely faster, if I had to come up with two ways to describe it compared to 'For All Kings'."

At the 2019 Download festival in the United Kingdom, Benante said fans can expect to hear some surprises on ANTHRAX's next disc. "There's some extreme stuff on this record that we touched on," he said. "There's different things that we're gonna try and do that's gonna make it next level."

Also in 2019, Benante told Australia's "Everblack" podcast that ANTHRAX's new music is shaping up to be "a little more in the aggressive style."