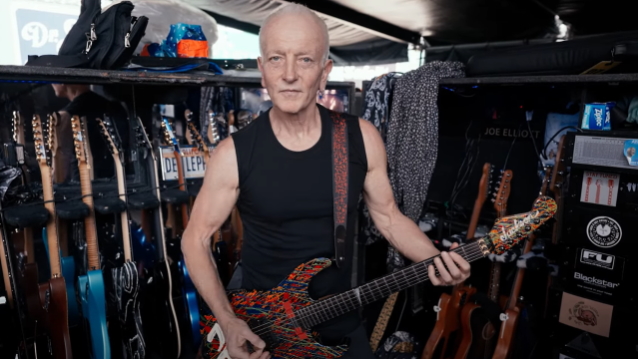 Watch: DEF LEPPARD's PHIL COLLEN Shares Story Behind Iconic Riff From 'Pour Some Sugar On Me'

Jackson Guitars has uploaded a new episode of "Behind The Riff" in which DEF LEPPARD guitarist Phil Collen takes you through the story of the iconic riff from the band's classic song "Pour Some Sugar On Me".

Released in 1988, "Pour Some Sugar On Me" peaked at No. 2 on Billboard's Top 100 singles chart and started an explosion of over a million copies of the "Hysteria" album to be shipped in a single day.

DEF LEPPARD's "The Stadium Tour" kicked off on June 16 in Atlanta, Georgia. The veteran British rockers are co-headlining the trek with MÖTLEY CRÜE, with support from POISON and JOAN JETT & THE BLACKHEARTS.