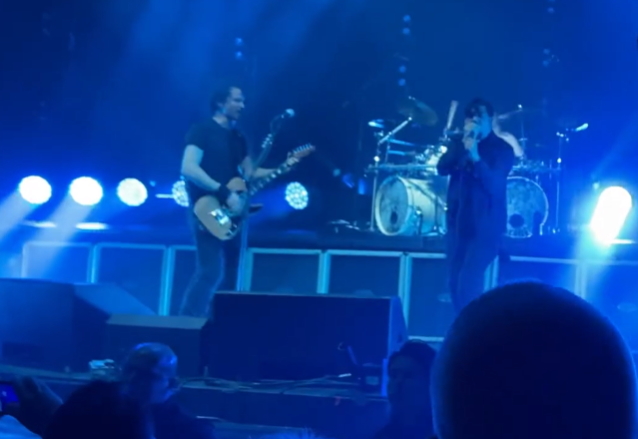 DEFTONES frontman Chino Moreno joined GOJIRA on stage last night (Saturday, May 28) during the two bands' joint concert at the Amory in Minneapolis, Minnesota to perform a cover of SEPULTURA's "Territory". Fan-filmed video of his appearance can be seen below.

GOJIRA guitarist/vocalist Joseph Duplantier spoke about SEPULTURA's influence on his band's music in an April 2021 interview with Cuartel Del Metal. At the time, he said: "SEPULTURA is massive in the history of our band, for some reason. I discovered 'Arise' first, and I was pretty blown away — it was so dark and so fast and so technical. It was right after I discovered the band DEATH and MORBID ANGEL, and then SEPULTURA. And I was absolutely blown away by their craft. And then, I had a few bands in high school, and I started to get together with my brother. We were playing at home, sometimes after school, and then we decided to form our own band. We dropped our other bands, got together, and 'Chaos A.D.' came along. And we were absolutely blown away — absolutely blown away. And [it was] easy to play too — it's simple riffs. They stripped down everything to the core… I mean, oh my God. They said it all with this album."

As for what he thinks when people compare GOJIRA's song "Amazonia" to SEPULTURA, Joseph said: "I go, 'Yup.' And it's a compliment, and there is no shame here. And we ripped them off, but we didn't do it on purpose. But we realized it right after. We were, like, 'Oh, that sounds like SEPULTURA. Ahhh, whatever.' It's a tribute to SEPULTURA — how about that? It's about Brazil. It's about the Amazon. It's tribal."

"Amazonia" is taken from GOJIRA's latest album, "Fortitude", which came out in April 2021 via Roadrunner Records. The follow-up to 2016's "Magma" was recorded and produced by Duplantier at Silver Cord Studio — GOJIRA's Ridgewood, Queens, New York headquarters — and mixed by Andy Wallace (NIRVANA, RAGE AGAINST THE MACHINE).

Chino and his DEFTONES bandmates were indirectly responsible for the name of Max Cavalera's post-SEPULTURA project. Fresh off his December 1996 split with SEPULTURA, Max spent the better part of 1997 trying to assemble a new group while guesting on DEFTONES' song "Headup", which appeared on the Sacramento alt-metallers "Around The Fur" studio album. Cavalera was struggling to find a name for his new act, going as far as to consult with the leader of the Brazilian Xavantes tribe, who played an integral role in shaping SEPULTURA's "Roots" album. Remembering the made-up word "soulfly" from "Headup", Cavalera found the right name for his post-SEPULTURA band, subsequently revealing it in a surprise announcement on live French television in 1997.