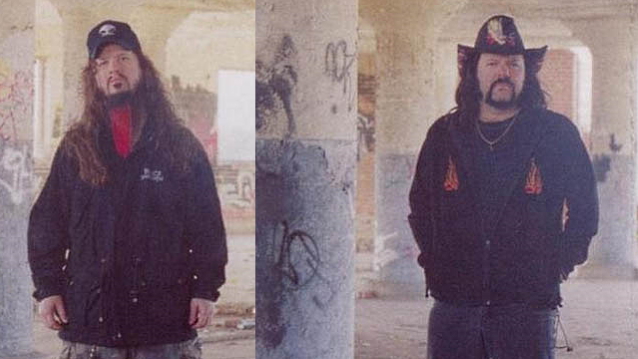 Robert "Videobob" Moseley, who did videography, graphic art and more for the likes of PANTERA, DAMAGEPLAN, HELLYEAH and Vinnie Paul Abbott's record label endeavor, Big Vin Records, spoke to Daze With Jordan The Lion about his friendship with the late drummer and his work with all the aforementioned bands. They also visit a couple of important PANTERA-related sites in the Dallas, Texas area, including the graves of Vinnie Paul and his brother "Dimebag" Darrell Abbott, and Dimebag's house, where his legendary studio was located. Check out the 26-minute report below.

In a 2013 interview with the Dallas Observer, Moseley stated about his friendship with the Abbott brothers: "I had known Vinnie and his brother for many years just because we all hung in that scene, going all the way back to those 'Power Metal' days in clubs. I guess my work kept landing into Vinnie's hands via other artists that I did work for and he called me up one day and offered me a job at his record label."

Moseley is currently based in Las Vegas where he works as a television producer, actor, singer and custom car builder. He also has his own reality show "Screen Machines" about his shop Bob's Prop Shop.

Dimebag and Vinnie Paul are buried at the Moore Memorial Gardens Cemetery in Arlington, Texas.