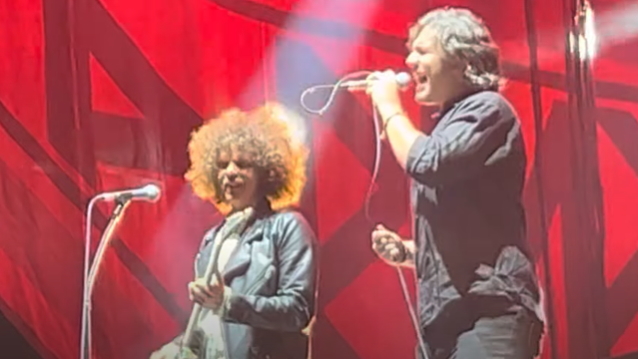 Gene Simmons's son Nick joined WOLFMOTHER on stage on Saturday, September 10 in Gold Coast, Australia to perform the song "Woman". Fan-filmed video of his appearance can be seen below.

WOLFMOTHER was the support act on the last two shows of the Australian leg of KISS's "End Of The Road" farewell tour.

On Sunday (September 11),Gene took to his Twitter to share a photo of Nick performing with WOLFMOTHER, and he included the following message: "Nick @nicktsimmons joined WOLFMOTHER @wolfmother onstage for a song, right before we hit the stage at Gold Coast Cbus Super Stadium. They rocked it out of the park.!"

Back in 2014, Page Six reported that the now-33-year-old Nick Simmons had launched a musical project of his own. At the time Nick likened his band's sound to THE BLACK KEYS, adding he wasn't worrying about people comparing him to his father, saying: "That's going to happen anyway, so I might as well do what I love in the meantime." Two years later, his described his band's sound as "eclectic. I wouldn't say it's 'rock.' I always loved blues, and it has some blues roots. Whatever the hell Beck is, it's probably like that." Nick also said of his famous dad: "He taught me how to talk the confident talk. He's not always right… In fact, he's overly confident about most things he's wrong about, but he's good at appearing very assertive, so he taught me how to do that."

Gene and his wife Shannon were married in 2011 after dating since 1975. They also have a daughter, Sophie, 30.

Nick ⁦@nicktsimmons⁩ joined Wolfmother ⁦@wolfmother⁩ onstage for a song, right before we hit the stage at Gold Coast Cbus Super Stadium. They rocked it out of the park.! pic.twitter.com/GTNIkQ7b3G