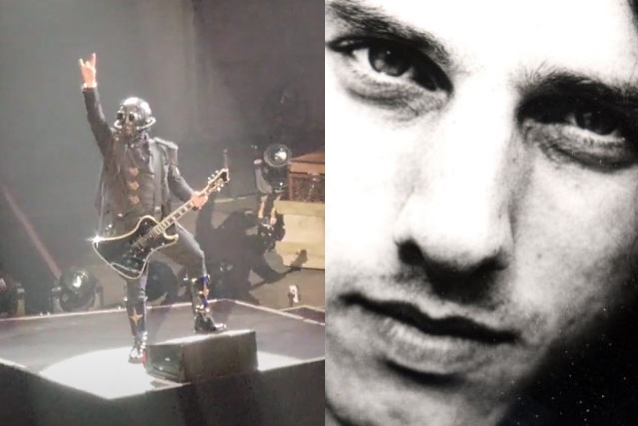 Before launching into the song "Cirice" at the Yuengling Center on Tuesday (September 6), one of GHOST's Nameless Ghoul guitarists played the opening riff of the DEATH classic "Zombie Ritual" in honor of Schuldiner, who founded his pioneering death metal outfit nearly four decades ago in nearby Orlando. Fan-filmed video of the tribute can be seen below.

Chuck died in December 2001 after a battle with pontine glioma, a rare type of brain tumor.

Four years ago, GHOST leader Tobias Forge said that he wanted his pre-GHOST death metal outfit REPUGNANT "to become a big band" similar to AMON AMARTH but lamented their stalled progress because they were "unfashionable" and "unprofessional."

Forge formed REPUGNANT in 1998 and performed under the name "Mary Goore", eventually releasing a few demos and an EP before recording their lone full-length "Epitome Of Darkness" in 2002. REPUGNANT called it quits in 2004, with Dutch independent Soulseller Records releasing "Epitome Of Darkness" two years later. The album — a veritable concoction of vintage Stockholm death metal with obscure, eerie melodies — had only mild impact upon its release but appears to have preceded the current crop of death metal bands who have parlayed largely the same formula to greater underground metal notoriety.

In an interview with David E. Gehlke, Forge was asked whether his success with GHOST ever made him reflect about his time with REPUGNANT. He said: "The one thing I don't think was very evident just because of how things played out with REPUGNANT, was that, if you asked me in 1999 or 2000 or 2001, I really wanted REPUGNANT to be signed up by a Roadrunner or Nuclear Blast or a big label. I wanted to be super-professional with the band. At the time, we were very unfashionable. It was just not asked for in that sort of realm and had things been played out differently or maybe I played my cards differently, because if I look back on how I did things, it was unprofessional and I didn't really have the foresight, I guess. I had the dream, but I didn't have the foresight. We were picked up by a real label at the time and got a manager and had everyone kept their ducks in a row, I would have loved to have that band, the closest example of a band like that could be comparable is like AMON AMARTH. A real band that was out touring. I always wanted that. I really wanted to become a big band. I wanted that, but I couldn't. I don't know if we were good enough or whatever. Now, knowing a lot of the things that is required, how many stars that need to align and all the decisions you have to make, I can definitely look back on myself as a 21-year-old and quickly see why I didn't achieve that with REPUGNANT. I wasn't mature. I wasn't thinking. I wasn't there yet."

The last-known lineup of REPUGNANT included current and former members of IN SOLITUDE, TRIBULATION and WATAIN, providing a mish-mash of some of Swedish metal's most critically acclaimed bands of the last decade. Forge said that he had repaired the relationship with his former bandmates after the split but warned against the idea of a full-blown REPUGNANT reunion. "I think the band that was REPUGNANT on 'Epitome Of Darkness', I think we are now better friends than we've been over the last ten years, at least, ten, fifteen years," he said. "We had various degrees of falling out for different reasons. It just sputtered out. We've had our disagreements and whatnot, the same shit that everybody goes through. But, nowadays, we don't really have much to do with each other anymore, but we're just friends. We're all, except for one of us, we all have kids, we're all married. We're old dudes. [Laughs] I don't feel very old. We're a little bit wiser now and maybe that alone gives us a reason to not sort of resuscitate that corpse again. Just let it lie."