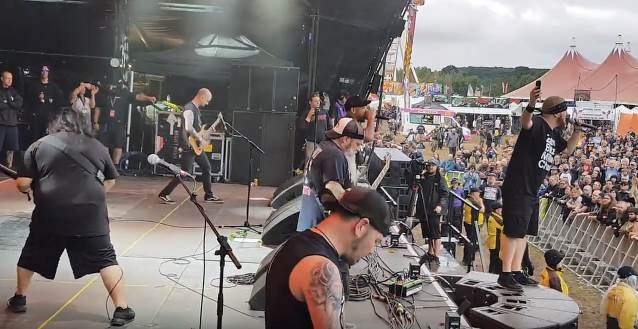 Video footage of JASTA & FRIENDS, the solo project of HATEBREED frontman Jamey Jasta, performing on Sunday, August 12 at the U.K.'s Bloodstock Open Air festival, held in Walton-on-Trent, Derbyshire, can be seen below (courtesy of D.J. Pennell from TotalRock.com).

Prior to the trek's launch, Dino said in a statement: "It's a honor that Jamey Jasta asked me to be a part of the JASTA AND FRIENDS 'European Vacation' tour as well as performing at Jasta's birthday show on August 7th in Wallingford, Connecticut. Playing alongside Howard Jones, Kirk Windstein and Jasta will be honor and fun as hell. Hope to see you all out there."

This past May, Jasta released a new solo song titled "13 Appears". The track featured guest appearances by PRONG mainman Tommy Victor and guitarist Joey Concepcion, who has previously played with SANCTUARY, THE ABSENCE and ARMAGEDDON.

"13 Appears" was the first new solo Jasta song to be released since "Chasing Demons", which was made available last year. That track featured guest vocals from Jones.