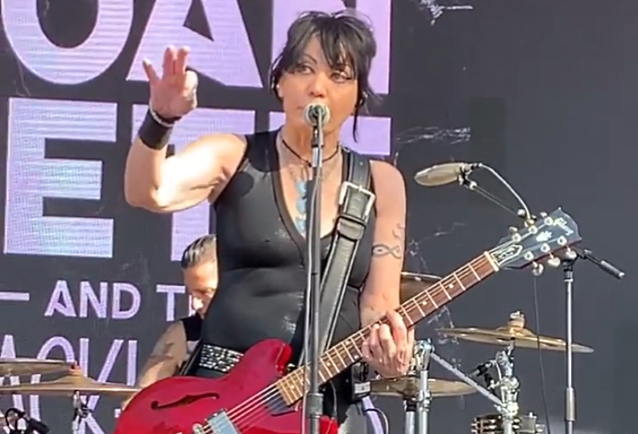 Joan Jett paid tribute to Taylor Hawkins during her headlining concert on Saturday (March 26) at the Brookhaven Cherry Blossom Festival in Brookhaven, Georgia. Prior to launching into the song "Fragile" from her band JOAN JETT AND THE BLACKHEARTS, she called Taylor "one of the greatest drummers of our time," adding that "the [FOO FIGHTERS] and Taylor are good friends of ours. And I can't even tell you what it means to all of us." Her voice cracking with emotion, Joan went on to say: "So this next song is for him. But really, all of you take it to heart — it's true for everybody: life is very fragile. One moment you're here and the next you're gone."

Jett served one of the guest vocalists when the surviving NIRVANA members — including FOO FIGHTERS frontman Dave Grohl and guitarist Pat Smear — performed together to celebrate the band's induction into the Rock And Roll Hall Of Fame in 2014. Four years later, she performed with Grohl, Smear and former NIRVANA bassist Krist Novoselic at Cal Jam.

Joan Jett’s tribute to the late Taylor Hawkins. She is close to the Foo Fighters and has opened for them on tour. She also fronted Nirvana for their induction into the Rock hall of fame. The song is titled… Fragile. Brookhaven Cherry Blossom Festival. Atlanta GA 3/26/22 🖤