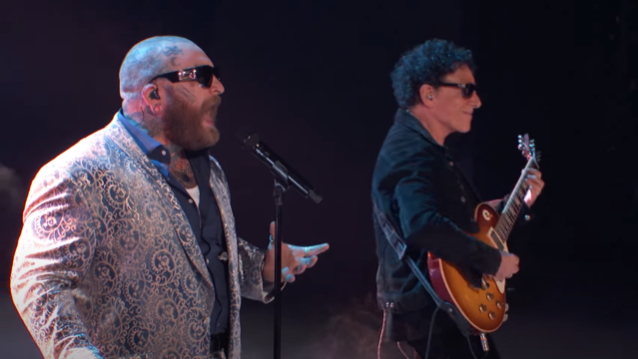 Earlier this week, Swims released his official cover of "Don't Stop Believin'", three months after his performance of the track went viral on YouTube, Instagram and TikTok.

The 29-year-old vocalist, who hails from Conyers, Georgia, embarked on a career in soul music after listening to Al Green. Swims also went to beauty school and played in hair-metal cover bands. Now he's got upwards of 440 million views on YouTube and millions of followers.

More than a year ago, "Don't Stop Believin'" reached 1 billion listens on Spotify.

In a 2009 interview with CBC's "Q" cultural affairs show, former JOURNEY singer Perry said he always thought "Don't Stop Believing" — which is also the top-selling digital download of a track not originally released in this century, according to Nielsen SoundScan — had potential as a single. It was always a hit with live audiences, though it didn't get great radio play at the time it was issued, he said.

"When we were doing the song in 1981, I knew something was happening, but honestly, when I saw it in the film 'Monster' with Patty Jenkins, I started think, 'Oh my goodness there's really something.'"

Current JOURNEY singer Arnel Pineda, who has been fronting the band for 15 years, told CBS News in 2012, "Even before I discovered 'Don't Stop Believin'', it has been my motto — you know, to never stop believing in myself. The life that I've gone through, all those hardships, I never stopped believing that someday there is something magical that will happen in my life."

In 2020, at the beginning of the coronavirus pandemic, "Don't Stop Believin'" had become a rallying call for patients recovering from COVID-19 at two hospitals in New York and Michigan. The 1981 hit was being played at Henry Ford Hospital in Detroit, Michigan and the New York-Presbyterian Queens Hospital during celebrations for patients prevailing over the coronavirus.