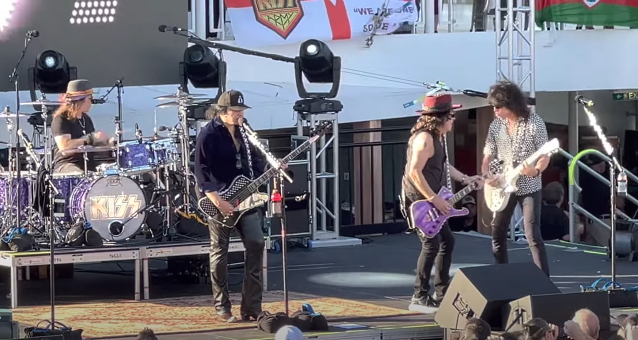 Fan-filmed video of KISS performing the song "Two Timer" live on October 24 during this year's Kiss Kruise can be seen below.

Both Kiss Kruise XI adventures will feature very special live shows from KISS, including an unmasked pool deck performance for all members of the Kiss Navy and a masked electric show inside Norwegian Jewel's intimate Stardust Theater. What's more, each week will boast a completely unique line-up of hard rock heroes and heavy metal icons, with Week 1 including performances by DOKKEN (featuring a reunion with guitarist George Lynch),WARRANT, L.A. GUNS, Bruce Kulick, All Hands on Deck Super Jam featuring Lita Ford & Friends, GEORGE LYNCH AND THE ELECTRIC FREEDOM, HEART BY HEART, THE BIG DEAL and BARON. Week 2 will see KISS joined by BLACK LABEL SOCIETY, BUCKCHERRY, Bruce Kulick, All Hands on Deck Super Jam Feat. Sebastian Bach & Friends, STRYPER, VIXEN, PLUSH, THE WILD THINGS and Micky James. All Kiss Kruisers will receive signature engraved commemorative gifts and take part in two on-board activities with KISS as well as two on-board activities with each individual member of the band. As if all that weren't enough, the Kiss Kruise XI will include the Kiss Expo (showcasing rare memorabilia),autograph sessions with the supporting artists, theme night costume parties, and much more. Guests who book on both Week 1 and Week 2 sailings will receive an exclusive laminate, a poster signed by KISS, happy hour and group photos with KISS, and an exclusive KISS Kruise XI two-timer t-shirt.

This past February, KISS announced that "Kiss Kruise XI" would be their "last performance onboard".

As has been the case on all the previous cruises, fans will get to see KISS's unmasked acoustic and electric shows and engage in activities with the bandmembers.

Last year's edition of the "Kiss Kruise" required fans to be vaccinated to attend.

In October, KISS frontman Paul Stanley said that the final concert of the band's "End Of The Road" tour would likely happen by early 2023.

"I believe strongly by the beginning of 2023 we will be finished," Stanley told Ultimate Classic Rock, adding that "it seems only natural [for the final show] to be in New York. That is where the band started, and that was really the background for the band getting together and writing these songs and played loft parties and played clubs starting with an audience of probably 10 people," he said. "It seems we should go full circle."

Stanley went on to say that unlike KISS's 2000-2001 tour, which was also supposed to be its last, "End Of The Road" will truly be the last time KISS performs live. "It's a different time than we had pondered [farewell tours] in the past," Stanley explained. "The fact is that, physically, it's incredibly demanding to do what we do. Look, we played [recently] in Austin, an outdoor show, 100 percent humidity. We're running around for two-plus hours, not only with guitars, but I've got 30-plus pounds of gear on. There's a point where you go, 'You know what? This is more challenge than I want.' And I only want to do it as long as I can do it smiling.

"There's really no thought about changing our minds," he continued. "It has nothing to do with personalities in the band or tensions or a difference of opinion or musicality. It's purely practical. You can play beat the clock, but ultimately the clock wins."

In early 2019, Stanley told Australia's "Sunday Night" that "Rock And Roll All Nite" "has to be" the song that KISS performs as the last encore at the final concert of the "End Of The Road" tour. "That is the rock anthem that connects the world," he explained. "It was the start of other people coming up with anthems. They really didn't exist, per se. So, 'Rock And Roll All Nite And Party Every Day', that's a song that just connects with people on all different levels."

Simmons concurred, telling BUILD Series: "How do you not end with 'Rock And Roll All Nite'? We will have played that song, probably without exception, more than any other song we've ever been involved with. You might say, 'Aren't you sick and tired of hearing that?' But I will tell you the roar of the crowd, the smell of the grease paint, there ain't nothing like it. When you hear everybody getting jazzed about that and you get off the stage... [it's] like the fire in the belly. You're dog-tired; you've just done a big show; and you get up on that stage, when you see the joy in everybody's face... We've seen it all. We've been around for generations, but when you see a little 5-year-old kid in KISS makeup on his dad's shoulders who's wearing KISS makeup, next to his father... we're badass kind of guys — nothing affects us much — but that stuff will put a lump in your throat. You have to turn around for a second. It gets me. Yes, it's music, but it's generational, and it brings families together instead of separates [sic] them."

Kiss Kruise XI week one. I found Bart Barkac, Can you?