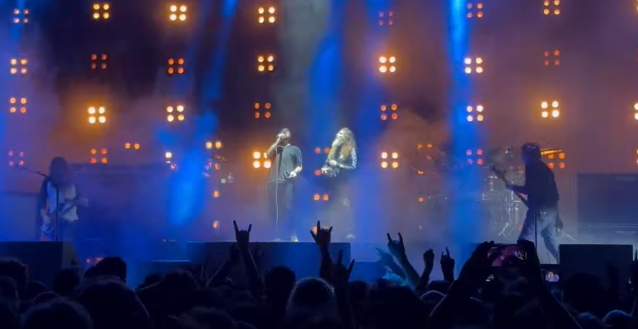 The DeftonesLive YouTube channel has uploaded video of SOULFLY's Max Cavalera joining DEFTONES on stage last night (Sunday, December 4) in Brisbane, Australia to perform the song "Headup". Check it out below.

DEFTONES singer Chino Moreno and his bandmates were indirectly responsible for the name of Max's post-SEPULTURA project. Fresh off his December 1996 split with SEPULTURA, Max spent the better part of 1997 trying to assemble a new group while guesting on "Headup", which appeared on the Sacramento alt-metallers' "Around The Fur" studio album. Cavalera was struggling to find a name for his new act, going as far as to consult with the leader of the Brazilian Xavantes tribe, who played an integral role in shaping SEPULTURA's "Roots" album. Remembering the made-up word "soulfly" from "Headup", Cavalera found the right name for his post-SEPULTURA band, subsequently revealing it in a surprise announcement on live French television in 1997.

In a 2019 interview with Asgard Video Channel, Cavalera admitted that the SOULFLY moniker was initially not to the liking of his then-label Roadrunner Records.

"It started with the song 'Headup' with the DEFTONES," he said. "I recorded with them and in the song, I said 'soulfly'. When I recorded with the DEFTONES, which was in '97, I didn't have SOULFLY until '98. For a whole year, I was looking for another name. I had a whole list of Brazilian names. I even had a guy from the tribe in Brazil [Xavantes] that we recorded the 'Roots' record, even he gave me a list of names. That's how deep it was to search for a name. It was right in front of me the whole time. I just didn't look hard enough. One day, it finally clicked, like 'Hey man: The DEFTONES song. 'Headup'. 'SOULFLY is great.' It's a made-up word.

"I like made-up words like 'Straighthate', when you put two words together," he continued. "We mentioned, I think we mentioned to the label [Roadrunner] and they didn't like it. I don't know if that was the case or I didn't mention it all and when I was in France and I was on TV and I said it. [Roadrunner] didn't like it. They said at the time, 'We need a cool name like LIMP BIZKIT or KORN.' I was, like, 'I don't have one of those. I have SOULFLY. Fuck it.' They didn't like it. I was, like, 'Fuck it. I don't care if they like it or not. It's my thing, it's my band.' I went on TV in France and I announced it: 'The name of my new band is SOULFLY.' It's a big channel called Canal Plus. They did a lot of stuff and I was playing live, I think with the DEFTONES, actually. I was doing 'Headup'. I just blurted it out: 'SOULFLY is the name of the new band.' I think that was pre-Internet. If it was today, it would be a lot more shocking. It would be all over the news: 'Max announces the name of his new band.' At that time, the Internet wasn't pumping like it is now. It's still cool."

According to Max, the SOULFLY name is based on "a tribal belief." He explained: "Many tribes — I did this research — in South America and Africa and even North America, believe when they make music, they are evoking the spirits of their ancestors through the music and their souls are flying around them when they are playing their instruments. A lot of them even believe — this is where it gets really crazy — the animal sacrificed to make skins for the drums, even the spirits of the animals get out through the drumming. It's really deep. It's a cool name; it's a positive name. I wanted to do something different. Like I said, I tried for a year to find a name and I had all these names that sounded like SEPULTURA, but it would just be a copy. I just went the other way. SOULFLY is as different of a name as it can get from SEPULTURA. I've tried to do things in a little bit of a different way and that's how it turned out."