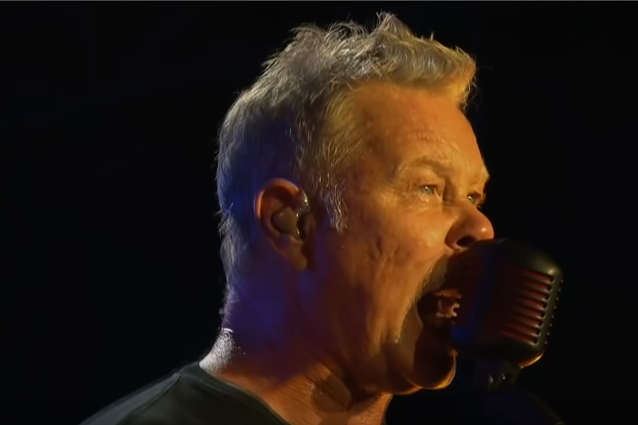 METALLICA played the songs "For Whom The Bell Tolls" and "No Leaf Clover" during its September 24 show at the Louder Than Life festival in Louisville, Kentucky as a contribution to the Global Citizen livestream, a worldwide charity event which was broadcast over 24 hours around the world on Apple Music, Apple TV app, YouTube and Twitter. Video of METALLICA's performance is available below.

METALLICA previously stated: "We're honored to support the work that our friends at Global Citizen do day in and day out to help to make the planet a better place."

Back in 2016, METALLICA played an abbreviated set at the Global Citizen festival in New York City. The free event on the Great Lawn in Central Park aired live on MSNBC.

"I love my sons. I want them to 'inherit the Earth,'" METALLICA drummer Lars Ulrich said at the time of the band's participation in the event. "We keep waiting for future generations to solve the problems… I want lawmakers and laws to impose change. Nothing else will keep this world safe for my sons."

Regarding METALLICA's philanthropic work, Ulrich said: "We do as much as we can… The hardest thing about these types of things is just finding the right balances between how vocal you are about it, because sometimes when you're really vocal about it, there could be a fear of … just tooting our own horn."

Asked why METALLICA wanted to perform at Global Citizen, Ulrich told the New York Post in a 2016 interview: "The festival has been on our radar for a few years. I was watching [Stephen] Colbert last year and Hugh Evans [co-founder of Global Poverty Project] came out. I was super-impressed at how passionate and personable he is. Not to rank do-gooders, but sometimes you wonder if there's an ulterior motive. But he has an earnestness that is very infectious. And there's a politically neutral tone to what he does."