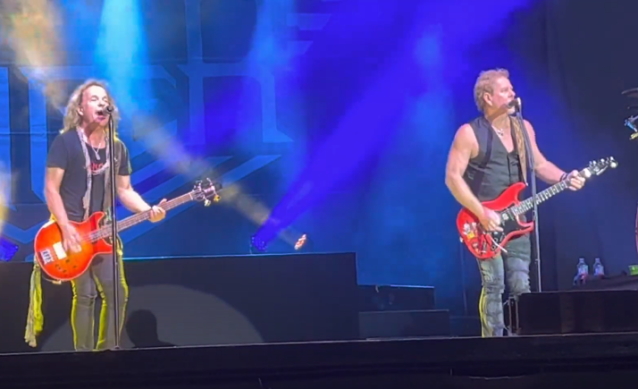 Fan-filmed video of NIGHT RANGER performing a cover of the OZZY OSBOURNE classic "Crazy Train" on August 23 at the Lorain County Fair in Wellington, Ohio can be seen below.

NIGHT RANGER has been playing "Crazy Train" regularly in recent years as a nod to the time when guitarist Brad Gillis took on the pressure-packed job back in 1982 of replacing Randy Rhoads after Ozzy's virtuoso guitarist died in a plane crash.

In a 2004 interview with the Contra Costa Times, Gillis spoke about how he landed the Ozzy gig. While a member of an early version of NIGHT RANGER, Gillis was also playing with a club band by the name of ALAMEDA ALL STARS. After a Friday-night gig early in 1982, at which the band covered two Osbourne songs, Gillis was approached by friend Preston Thrall, the brother of guitarist Pat Thrall, who'd turned down the chance to replace Rhoads. Preston offered to get an audition for Gillis, who said okay, but didn't think much of it.

Sunday morning he was on the phone with Ozzy, who simply gave him a list of songs to learn. Tuesday he was in New York, with a one-way plane ticket and $150. The promised room at the downtown hotel wasn't there, so Gillis ponied up $135 and went upstairs and waited. He finally got the call at midnight to come to Ozzy's suite, where a party was happening.

"Ozzy says, 'Go get your guitar,'" Gillis said. "You remember those E.F. Hutton commercials? Everyone just stopped. He says, 'Play 'Flying High Again'. ' By the time I get to the solo, he stands up, puts his arms around me, and says, 'Bradley, pull me through this (ordeal).' He takes me out and says, 'I've got a new guitar player.'"

Last year, Gillis told Guitar World magazine about his time with Osbourne: "You have to realize that after the sad death of Randy Rhoads, the band was going through a lot of emotional stress throughout the rest of the tour. So, when I joined the band, it was quite a heavy situation. Bernie Tormé was playing guitar at that time in the interim, before a permanent replacement was added. And when I flew to New York for the audition, I basically found out it was just me. So, I did the best I could practicing in my hotel room every day, with a small amp, a boombox and a live board cassette with Randy that had been recorded a few months earlier.

"At night, I would go to the shows to watch the live performance from the soundboard. I was amazed at the large castle, fire, explosives, and the hanging of the dwarf — realizing that in a few days, I was going to be up on stage. I'll never forget the sound man looking over at me and laughing, saying, 'You're next, buddy!'

"My first night was quite a horrendous experience — because not only was I scared to death, at soundcheck, we only played seven out of the 18-song set, and Ozzy didn't even show up. My first gig was sold out in Binghamton, New York for 8,000 people. That was basically my entrance into Ozzy's world. I ended up botching 'Revelation (Mother Earth)', as I ended up coming into the fast section too early, and the whole band looked at me, like, 'What the hell are you doing?' I stopped playing, regained my composure, and finished out the song and the set — with no other major mistakes. The next night before we went on stage, Sharon [Osbourne, Ozzy's wife] came up to me, saying, 'Bradley, you're doing a great job. But tonight… don't fuck up.'"

Join us August 23rd as we rock the Lorain County Fair in Wellington, Ohio! 🤘