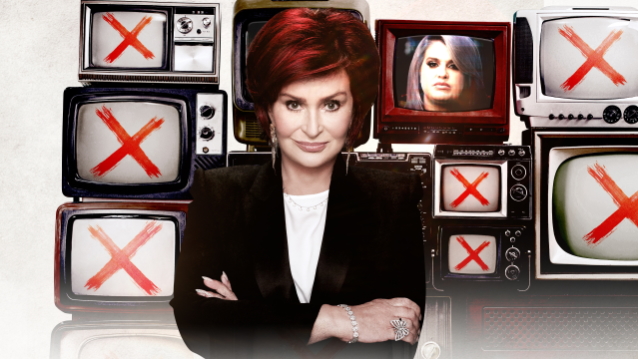 On September 26, FOX Nation will premiere a documentary series about music and television industry star Sharon Osbourne, titled "Sharon Osbourne: To Hell & Back". The four-part program will feature a candid and heartfelt look into Osbourne's personal and professional life, highlighting how she found herself in the crosshairs of the cancel culture movement after exiting CBS's "The Talk". An official trailer is available below.

In making the announcement, the streaming platform's president Jason Klarman said: "We are excited to be the place that Sharon chose to tell her incredible story. From her remarkable career as a music manager, to creating television's first celebrity reality show, to her dramatic exit from 'The Talk', Sharon will take viewers behind the scenes of it all."

Osbourne added: "FOX Nation subscribers will have an unbridled look into the toll the cancel culture phenomenon had on my life and career. I hope telling my story for the first time will help audiences understand the impact this movement can have on individuals and families."

In the original FOX Nation series, Osbourne will fully document her experience at CBS, including the events that led to her departure from "The Talk" and the fallout that occurred after she left. The documentary will also include insight and personal stories from her husband, music legend Ozzy Osbourne along with their children, Jack and Kelly Osbourne. Additionally, the docuseries will feature interviews with many of those who were part of and witnessed the controversy that ended her time at "The Talk", including Daily Mail contributor and former co-host of ABC's "The View"Meghan McCain, Piers Morgan, host of TalkTV's (News UK) "Uncensored" which also streams on FOX Nation, among others.

A renowned television personality and accomplished music industry executive, Osbourne was the creator and producer of the first reality celebrity television show, MTV's "The Osbournes" which won an Emmy award for "Best Reality Show" in 2002. Most recently, she joined News UK's TalkTV where she hosts a primetime roundtable program (also titled "The Talk") which launched on April 25 with five opinionated famous faces — all from different backgrounds with differing views — debating the most interesting stories of the day.

FOX Nation is a direct-to-consumer on-demand streaming service designed to complement the FOX News channel experience with a members-only destination for its most passionate and loyal super fans. Featuring nearly 5,000 hours of content, the subscription service includes conservative opinion programming, lifestyle, and entertainment content, as well as historical documentaries and investigative series from a multitude of FOX News personalities at a cost of $5.99 a month/$64.99 a year. Launched in 2018, FOX Nation is available at foxnation.com and via app for iOS devices, Android devices, Fire TV, Apple TV, Google TV, Android TV, Roku, Xbox One, Vizio TVs, and Samsung TVs as well as DIRECTV, Comcast Xfinity, Cox Contour, YouTube TV, and The Roku Channel.