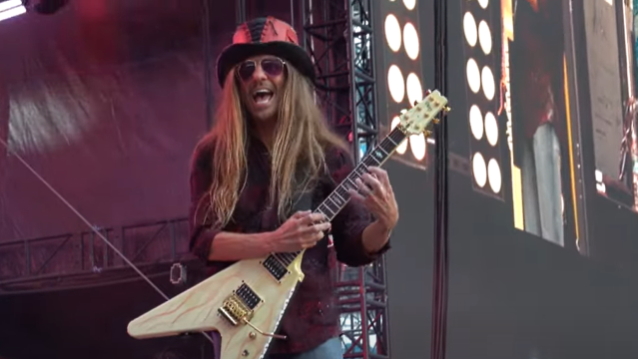 Fan-filmed video of POISON guitarist C.C. DeVille shredding Eddie Van Halen's "Eruption" during his mid-set guitar solo at the Miami Gardens, Florida stop of "The Stadium Tour" on June 18 at Hard Rock Stadium can be seen below.

DeVille has been publicly voicing his appreciation for Van Halen's talents for more than three decades, telling Guitar World magazine in a 1989 interview: "If guitar playing has turned into an athletic event, then Eddie Van Halen is the Olympic champion — he lit the flame. Speed is a great thing to have when you need it and something I'm always trying hard to develop, but Edward is the master at using it properly. You'd have to be a fool to deny his influence on every rock player in this decade."

He continued: "Eddie saved rock 'n' roll. In 1979, music was starting to head towards synthesizers and skinny ties, and Van Halen came out and made it very chic to play guitar. He's still the greatest. You hear kids saying he's not good anymore, but they can't appreciate what a good songwriter he's turned into."

Back in 2008, Guitar World famously named DeVille's "Guitar Solo" from POISON's 1991 release "Swallow This Live!" the "worst guitar solo" of all time. In explaining its selection, the magazine wrote: "Remember when you were in high school and your novice shredder best friend kept insisting he'd 'almost nailed' Eddie Van Halen's 'Eruption' solo, and you'd be stuck in his room wanting to kill yourself as he tried to play it again and again? That's a little what listening to C.C.'s jaw-dropping nine-minute solo spot is like. Only instead of your friend going 'No, wait!' and starting over every time he f***s up, there's an arena full of idiots loudly cheering him on. And just to show you the breadth of his chops, C.C. also throws in a messy attempt at some 'Hot Club'–style gypsy jazz licks (Django Reinhardt would surely be envious of the tres magnifique tones C.C. coaxes from his pointy-headstocked ax),a touch of polka, some searing Miami Vice blues bends and, of course, several more dive bombs and two-handed tapping runs whenever inspiration fails. Completely devoid of taste, structure or steady tempo, this should be required listening for budding guitarists everywhere. Surely they can't do any worse."