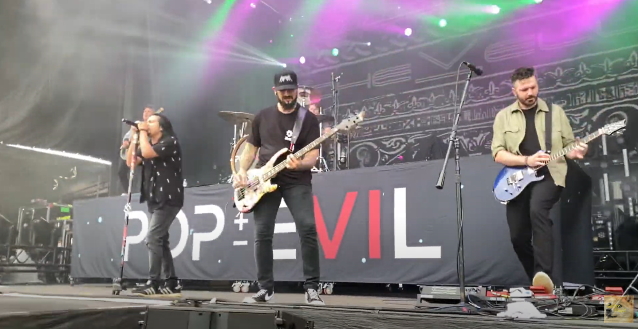 Fan-filmed video footage of POP EVIL's July 16 performance at the Upheaval festival in Grand Rapids, Michigan can be seen below.

Last weekend, POP EVIL's longtime bassist Matt DiRito announced his exit from the band, saying in a statement that "the details surrounding my departure are only known by a few people, and respectfully it will remain that way."

POP EVIL drummer Hayley Cramer is being forced to miss the first couple of weeks of the band's U.S. tour because of COVID-19 travel restrictions.

The U.K.-based musician, who joined the Michigan rockers in 2016, announced her absence from the first shows of the trek in a social media post on July 8.

She wrote: "Hey everyone! As I'm sure some of you have noticed, POP EVIL have started rehearsals yet I'm still here in the UK. So I just want to fill you all in with where we are at with regards to some travel logistics back to America.

"We have been able to secure a meeting with the consulate on the 21st of July to get my P1 visa renewed. The embassy is extremely backed up due to the pandemic, but our immigration team have really delivered. Some people are still waiting to obtain an appointment! This does mean unfortunately I will be missing the first couple of weeks of tour.

"I can't wait to get back to play shows in front of you all again. In the meantime, a fantastic drummer Jason Hartless will be filling in for me and will deliver a kick ass performance for sure!!

"I want to encourage you to continually show your love, encouragement and support to bands, musicians, crews and venues. We need all the help you can give to rebuild our precious yet vulnerable music industry. Live music in particular!

POP EVIL's "Versatile" tour kicked off on July 14 with an outdoor show in Lake County, Illinois and will run across the U.S. until September 23 including stops at several of the major rock festivals — Rocklahoma, Aftershock and Inkcarceration — as well as supporting SHINEDOWN. Support on the trek will come from special guests ZERO 9:36, BRKN LOVE and LIKE MACHINES (on select dates).

We got Jason M Hartless on drums dough
Miss you Chuck Alkazian!!!!