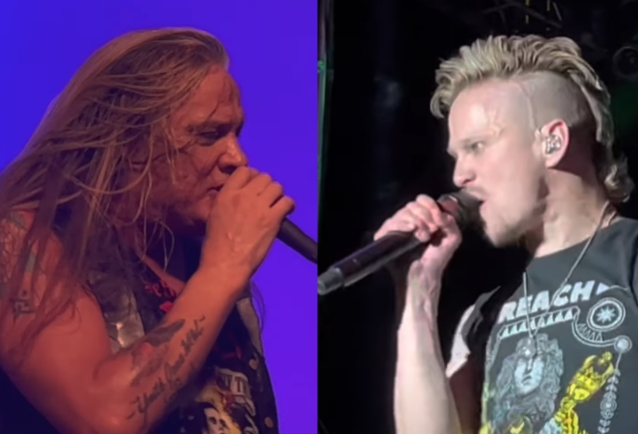 Sebastian Bach played a headlining show this past Saturday (July 23) in downtown Las Vegas as part of Fremont Street Experience's free concert series. The gig notably took place the same night that Bach's former bandmates in SKID ROW played at Sunset Station in nearby Henderson — approximately 11 miles away — as part of the "Live To Rock" tour with WARRANT, WINGER and QUIET RIOT. Fan-filmed video of both concerts can be seen below.

This past March, SKID ROW guitarist Dave "Snake" Sabo was asked by Scott Penfold of Loaded Radio how he feels about people still calling for a reunion with Bach. He said: "Well, it's been 23 years [since SKID ROW reformed], so to say that I'm over it would be an understatement. We attempted [a reunion] slightly [back in 2016]. We dipped our toes in the water and realized that it didn't feel so good. It's just one of those things where we still could not see eye to eye; we couldn't even get past the point of simple texting.

SKID ROW fired Solinger over the phone in April 2015, a few hours before announcing ex-TNT vocalist Tony Harnell as his replacement. Eight months later, Harnell exited the band and was replaced by South African-born, British-based singer ZP Theart, who previously fronted DRAGONFORCE, TANK and I AM I. Theart was fired from SKID ROW in February and was replaced by Erik Grönwall, who was previously a member of the Swedish hard rock band H.E.A.T.

Was not impressed with Quiet Riot, as well as Winger....Warrant was ok and Skid Row w/new vocalist dropped a new song...

So tonight in town we had Sebastian Bach playing on Fremont Street and Skid Row playing outside of Sunset Station - only in Vegas !!!!