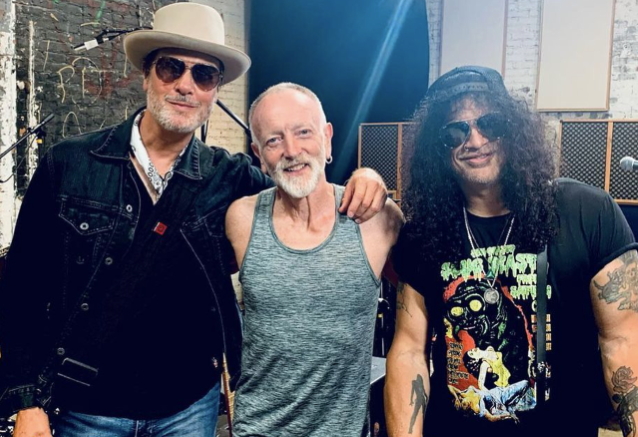 In an Instagram post, DeLeo called the experience at Gold-Diggers in East Hollywood "a very memorable" and "very emotional day". He added: "This is now where my beloved 1974 Neve 8014 console resides. Lots of great music and memories have passed through this board and I know it has gone to a great home. All around it has been such an amazing day with great friends!"

Lauded as "one of the most important fundraisers" by the Los Angeles Times, Beastly Ball, now in its 51st year, started as a glitzy Hollywood gala and has evolved into a virtual global celebration that welcomes viewers from around the world to tune in and support the Los Angeles Zoo.

This year's star-studded event was hosted by actor, comedian and TV host Joel McHale and honored the philanthropic work of actors Jackie Chan and Leila George, and was filled with inspiring conservation stories; special celebrity guests; animal moments; an online auction; and additional musical performances by WEEZER, REO SPEEDWAGON's Kevin Cronin and Poet Christopher Simms reading a poem he wrote called "The Return of the Earth/She".

Prior to the event, Greater Los Angeles Zoo Association president Tom Jacobson stated: "Last year more than 21,000 people from around the globe joined the celebration, making it our biggest and wildest party to date. And with Joel McHale returning to host the event, it is guaranteed to be a laughter-filled evening of philanthropy, fun, favorite animals, and fabulous celebrity friends."

He added: "This year’s conservation honorees hail from different parts of the world and represent the diverse voices creating social awareness for the need to protect native species and wildlife habitat around the globe. And with conservation at the core of what we do, this fundraiser supports GLAZA's efforts to fund a myriad of programs including conservation, animal care, animal health, and education programs at the Los Angeles Zoo."

For the first time ever, the Beastly Ball had a dedicated art auction featuring an eclectic mix of celebrity, local, and international artists, who contributed over 65 unique and original pieces of art ranging from sculpture and paintings to prints and photographs. The theme of this year's art auction was nature, wildlife, climate change and our blue planet and included works by actor and comedian Mike Myers and the late American poet and writer Allen Ginsberg; as well as Los Angeles-based artists Narb Avedissian, Juan Bastos, Javiera Estrada, Peter Liashkov, Dan McCleary, Michael Microulis, Ramone Munoz, Melora Walters, and more; and international artists Peggy H. Lee, Kat Serediuk, Kevin Sloan and Hannah Ward, among others.