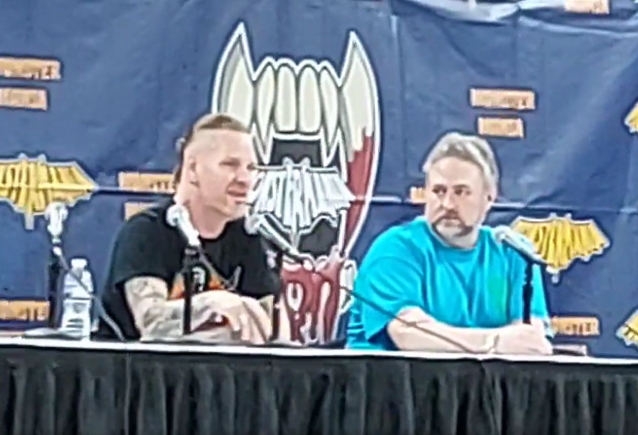 Watch: SLIPKNOT's COREY TAYLOR Tears Up While Reflecting On His Fistfight And Eventual Reconciliation With SID WILSON

During an appearance at the Monster-Mania Con this past weekend at The Greater Philadelphia Expo Center in Oaks, Pennsylvania, Corey Taylor was asked by a fan what one of the biggest fights he ever had with a SLIPKNOT bandmate was about. He responded (with transcription help from Bob Suehs of Rock N Roll Experience): "Me and Sid [Wilson] got into a fistfight, and it's something that I'm not proud of. It was during a tough, tough time. He and I were at such parallel ends — polarized and parallel ends — of the universe for no reason other than we were just in different spots in our life. But for some reason we were just banging heads hard. And it wasn't good, to the point where when he would come into the room, I would leave, and if I came into the room, he would leave. This was about six years ago, so it's... We're good now, just so everybody knows. But it came to a head in Sweden. And he and I were both on a tear. Luckily, we kept this away from the fans. We had just had a meet-and-greet at the time. And a fan had given me a comic book that I had been looking for for a long time. So I was looking at it, and really appreciating it, and Sid being Sid, [he] came up and not knowing what was going on, he probably thought he was just joking, but came up and he just smacked it right out of my hand hard. He just nailed it. And in any other context, it would have been funny, like, 'Oh, you dick,' you know. But everything was amplified and all of the things you haven't said come rushing to the front of your mind and it becomes an issue. And that turned into us turning on each other and going at each other hard to the point where the band had to pull us apart. He was saying he was gonna go home and leave the tour. I wasn't going to apologize. It was bad, man."

Reflecting on how he and Wilson eventually repaired their rift, Taylor continued: "When I had my spinal surgery [Corey tears up], [ Sid] was the first one to call me and [pauses] he just said, he was, like, 'I'm so sorry,' and I said, 'I am so sorry.' And I said 'I love you.' He was, like, 'Are you okay?' And I was, like, 'I'm all right. It's all good.' And just like that, nothing mattered other than me and my brother. [Corey wipes his eyes]"

Corey added: "I'm really proud and I'm really glad that he and I could squash all that shit, because he's one of my favorite people in the world. Just the way he thinks, the way he creates, he's one of the best secret weapons that we have in SLIPKNOT, because his musical mind is so creative. And plus, he schools us on every mask that he comes up with. I just look at him and go, 'You fucker! Goddamn it! Why did you think of that?'

"But it's stuff like that that endears you to the people that you've been in the trenches with, that you've spent half your life with on the road building this thing. I didn't expect it, and yet to this day, it means the world to me. So that's how you carry on. It's not about the fights; it's about coming back together. And that's the most important thing that we're ever gonna know. It's that shit; that's the stuff that you do."

The tension between Taylor and Wilson was previously highlighted in the 2011 documentary "Goat" which was included in the 10th-anniversary special edition of SLIPKNOT 's "Iowa" album. The film, which captures footage from the chaotic "Iowa" cycle, includes a clip of the two musicians nearly coming to blows backstage for reasons that are not clear. At one point, Corey can be heard telling Wilson to "fuck off" and shouting at Sid, saying: "I'm so fucking pissed at you! Fuck you, you little fuckin' bitch." Corey and Sid can then be heard exchanging "fuck yous" with each other.

A decade and a half ago, Taylor discussed his strained relationship with his SLIPKNOT bandmates in an interview with Revolver magazine. At the time, he said: "SLIPKNOT is like a family reunion — it's good to see those people, but you can't wait to get away from them. It's the tension between the nine of us that helps us make the music. Because we don't get along, and I'll be the first to fucking admit it. People keep wanting me to candy-coat it like we're some fucking fraternity that lives together when we're at home. That's not what happens. We love each other but we also stay the fuck away from each other, you know?"

SLIPKNOT is continuing to tour in support of its latest album, "The End, So Far", which was released on September 30 via Roadrunner Records. The follow-up to "We Are Not Your Kind", it is the band's final record with Roadrunner after first signing with the rock and metal label in 1998.

MONSTER-MANIA ROCKS ITS WAY BACK TO THE GREATER PHILADELPHIA EXPO CENTER!

We are VERY excited to announce that award...