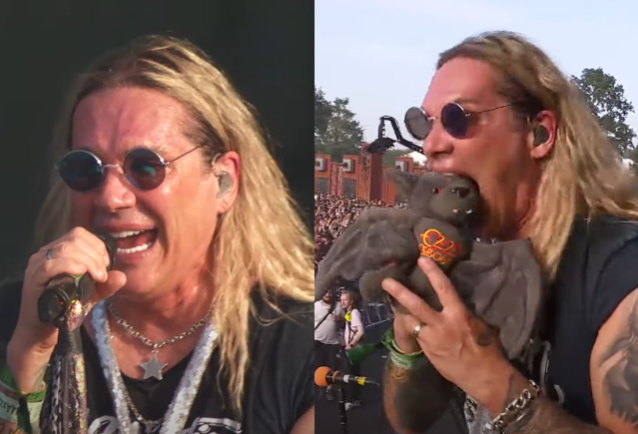 Professionally filmed video of STEEL PANTHER's entire June 18 performance at this year's Hellfest in Clisson, France can be seen below. The band's 11-song set included a cover of the OZZY OSBOURNE classic "Crazy Train", with STEEL PANTHER singer Michael Starr once again doing his hilarious impression of the legendary BLACK SABBATH frontman, complete with Ozzy's familiar rallying cries ("God bless you" and "Let's get crazy"),his stage moves and his lovable goofy smile. At the end of the song, Starr even proceeded to "bite off" the velcro detachable head from an official Ozzy soft toy Plush Bat.

In 2019, Osbourne released the plush toy to mark the 37th anniversary of his infamous bat-biting incident.

Back in 2014, Starr (nee Ralph Saenz) told The Morning Sun that STEEL PANTHER's music has grown from laughs to lauds as its music has been accepted by audiences.

"Playing covers for so many years [originally] branded us a cover band. It was hard to change that," he acknowledged. "Now there is no mistaking; we will be the biggest real metal band in the world by 2025 – unless we die first."

STEEL PANTHER is currently mastering its new studio album for a tentative late 2022 release. The band, which has not yet secured a permanent replacement for its original bassist Lexxi Foxx, has been working on the follow-up to 2019's "Heavy Metal Rules" for the last few months and recently completed mixing the LP.