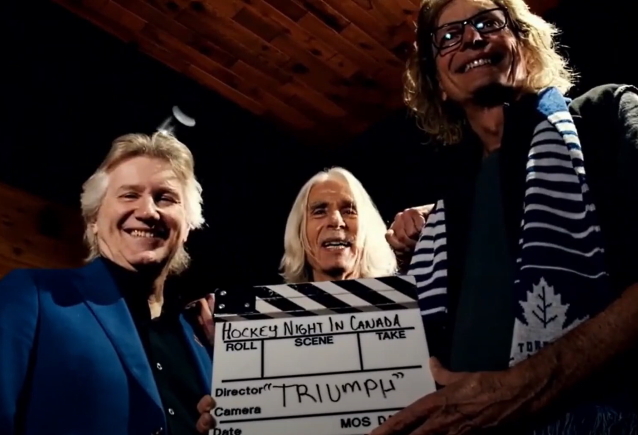 Last night (Saturday, November 12) at the Scotiabank Arena in Toronto, Ontario, Canada, Canadian Music Hall Of Famers TRIUMPH welcomed the new inductees to the Hockey Hall Of Fame to the exclusive club of those who have become icons in their field. A two-minute video report can be seen below.

The Hockey Hall Of Fame 2022 induction celebration will be held Monday, November 14, when Daniel Alfredsson, Roberto Luongo, Riikka Sallinen, Daniel Sedin and Henrik Sedin enter as players, and Herb Carnegie goes in as a builder.

TRIUMPH's long-awaited feature documentary "Triumph: Rock & Roll Machine", premiered in the U.S. in May via Nugs.net.

"Triumph: Rock & Roll Machine", produced by Emmy and Peabody award-winning Banger Films (ALICE COOPER, IRON MAIDEN, RUSH and ZZ TOP),covers TRIUMPH's humble beginnings as staples of the GTA circuit in the mid-'70s to their heyday as touring juggernauts, selling out arenas and stadiums all across North America with their legendary spectacular live shows — and way beyond.

Bassist Mike Levine, singer/guitarist Rik Emmett and drummer Gil Moore formed TRIUMPH in 1975, and their blend of heavy riff-rockers with progressive odysseys, peppered with thoughtful, inspiring lyrics and virtuosic guitar playing quickly made them a household name in Canada. Anthems like "Lay It On The Line", "Magic Power" and "Fight The Good Fight" broke them in the USA, and they amassed a legion of fiercely passionate fans. But, as a band that suddenly split at the zenith of their popularity, TRIUMPH missed out on an opportunity to say thank you to those loyal and devoted fans, a base that is still active today, more than three decades later.