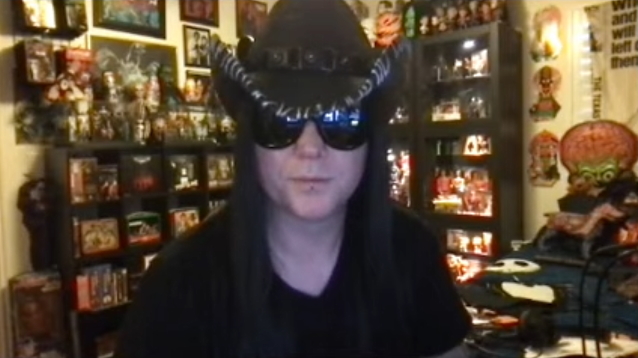 WEDNESDAY 13 Talks Upcoming Album: 'I Found It Really Hard To Be Inspired' During The Pandemic

Heavy horror punk icon Wednesday 13 spoke to Brutal Planet Magazine about his upcoming album which is due later in the year. The follow-up to 2019's "Necrophaze" will mark the former MURDERDOLLS frontman's first release for Napalm Records, with whom he signed last year.

"I started writing music as soon as I got home [at the beginning of the pandemic], and by the time this whole thing was over, I think I wrote about 50 pieces of music, and I only liked about 10 songs out of it, or 10 songs made sense to me," he said (as transcribed by BLABBERMOUTH.NET).

"I found it really hard to be inspired during this time," Wednesday 13 admitted. "And I wasn't gonna force anything, but it was a really difficult time to write. Even though I had all the time in the world off to write, there was no inspiration, 'cause the world was kind of shit. So, like always, I had to go back to what makes me happy. When the real world's too real for me, I go into this world [at my home studio], with all my toys. So when I started writing this new record and writing new stuff, I started writing about stuff that makes me happy. Like Christine [from the Stephen King tale 'Christine', which involves a cursed car that's just as scary as most movie villains], the car. So now we have a new song on the new record about Christine. So I'm happy."

Asked if there will be any guest musicians on the new WEDNESDAY 13 album, like there were on "Necrophaze", the singer, whose real name is Joseph Poole, said: "No. The idea on this record was… I mean, it was cool to have the guests on the last record. I love that because I wanted it set up like a movie and I wanted it to feel like there was guests in the movie and the whole vibe of it. This record, like I said, having the two years off [and] and not being really inspired by anything, it was really important for me to make this record as close with us as we could. That's why we recorded it all together ourselves; we did it here at our house. Roman [Surman, lead guitar] was able to come over. We were able to track. Jack [Tankersley, guitar], everybody, came in. Troy [Doebbler, bass] did his parts. But instead of getting a producer or getting any outside input, I just wanted this to be all about us. I didn't need a producer coming in, going, 'You guys should do this.' I'm, like, 'You know what? We're in a weird space. Let us figure it out.' We don't need someone else who doesn't know what the hell is going on to tell us what to do. So this record, I really wanted it to be just about us. I'm producing the record, and there's no outside guests; it's just us. And from my point of view, or how I hear this record, it's definitely closer to the 'Transylvania [90210: Songs Of Death, Dying, And The Dead]' and 'Skeletons' kind of vibe. It's still got a spooky horror fun vibe to it, it's got its dark moments, but overall, I think it's more of a rock record than, like, the 'Condolences' album."

WEDNESDAY 13's "20 Years Of Fear" tour will kick off on March 23 in Albuquerque, New Mexico and will end on May 7 in Sacramento, California.

"Necrophaze" was released in September 2019. The LP was recorded by Michael Spreitzer, who is the producer, recording engineer and longtime guitarist of DEVILDRIVER, and is the first WEDNESDAY 13 record to feature guest spots, which include performances by Alice Cooper, Roy Mayorga of STONE SOUR (who provides an eerie, authentic, '80s-inspired synth soundtrack-score to the album),Alexi Laiho of CHILDREN OF BODOM, and Cristina Scabbia of LACUNA COIL. Also making an appearance on the album is Jeff Clayton, member of legendary punk bands ANTISEEN and GG Allin's MURDER JUNKIES.

In November 2020, WEDNESDAY 13 released an official music video for its cover of INXS's hit song "Devil Inside". The clip, filmed and directed by Vicente Cordero (3TEETH, SEPTEMBER MOURNING),premiered during the band's "Halloween Spooktacular!" event on October 31, 2020 live from Whisky A Go Go in West Hollywood, California.