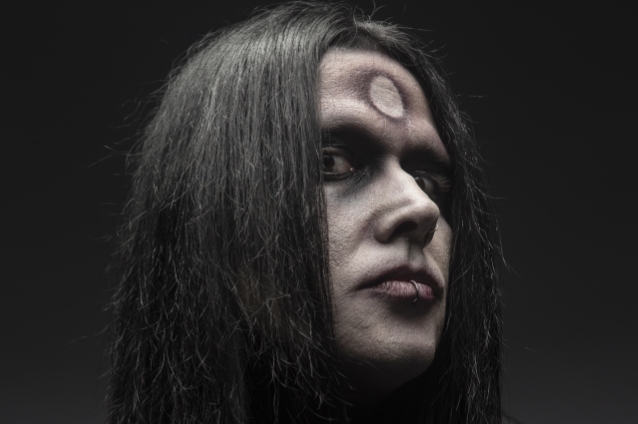 WEDNESDAY 13's 'Necrophaze' Will Be 'The Ultimate Horror Record'

Horror-punk stalwart Wednesday 13 spoke to Music Interview Corner about the status of his next studio album, "Necrophaze", tentatively due in early 2019 via Nuclear Blast.

"It's going to be really cool," he said (see video below). "I'm doing something totally different. All my records are different. It's still a little too early to say — I don't want to give it all out — but I think the fans are gonna love it. I think it's gonna be the ultimate horror record that I've ever done. And it's something different. I can't explain it yet. It's not a concept record, but it's something no one's ever [done] before that I know of, and it's gonna be cool… It's all coming together… We'll be making an announcement about it soon. And it's gonna be awesome. There's so much cool stuff beyond the music, if that makes sense. We've got some cool stuff going on with it. I'm excited."

According to Wednesday 13, the "Necrophaze" artwork and packaging will be designed to appeal to old-school fans who appreciate the physical product and its specific traits.

"If I get my way, there's gonna be two different album covers — one for vinyl, one for the CDs," he said. "Totally different artwork. CDs are dying. I still like CDs. I like vinyl. I still prefer CDs. I love to look at vinyl, and I like listening to vinyl sometimes. But CDs are kind of dying — a lot of people don't care about CDs anymore — so I'm putting extra work into the package, so our fans will care about it. 'Cause our fans do — they appreciate the packaging. And I'm one of those guys that used to buy a record and I wanted to open it up and see what this band was about. That was awesome to me. Some bands don't care. So, this is gonna tell the story, and I'm doing it in two different formats. And it's gonna be cool."

Wednesday 13 also talked about the songwriting for "Necrophaze", saying that it was a more collaborative effort than in the past.

"My band's very involved with the writing and the recording part, especially with this new one and the last record," he said. "They've written more of the music than I have, as far as when I used to write the guitar parts. But, of course, I still do all the vocals and give ideas. I wrote a few songs on the record, and our drummer wrote a few songs, Roman [Surman, guitar] wrote a few songs. So it's a collective thing, just like 'Condolences' was — same people. But I brought in Jack [Tankersley, guitar] and Troy [Doebbler, bass] this time, so they got a few songs. So this is really a collective thing this time. And it's different — it's different, but it's the same, if that makes sense. Old fans will like it, the newer fans will like it, and the fans that don't even know who we are yet — the unknown ones — will love it; we'll be their favorite new band."

Wednesday 13's latest album, "Condolences", was released in June 2017 via Nuclear Blast Entertainment. The follow-up to 2015's "Monsters Of The Universe" was produced by Chris "Zeuss" Harris, who previously worked with Wednesday 13 and guitarist Roman Surman on the 2010 MURDERDOLLS album "Women & Children Last". The artwork was created by Travis Smith (OPETH, KATATONIA, NEVERMORE).