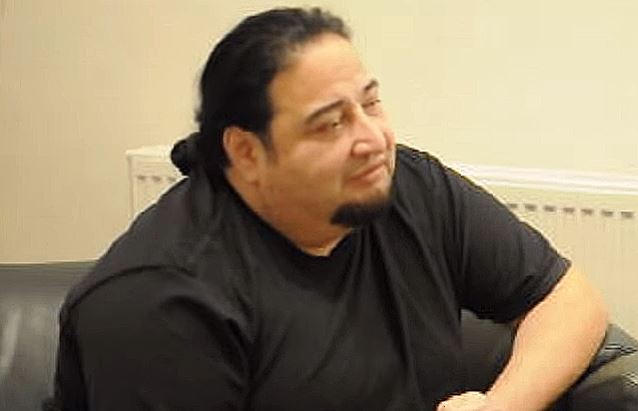 Unholy Music recently conducted an interview with FEAR FACTORY guitarist Dino Cazares. You can now watch the chat below. A couple of excerpts follow (transcribed by BLABBERMOUTH.NET).

On what makes a good FEAR FACTORY song:

Dino: "What makes a good FEAR FACTORY song is the guitar hook, the beat… The vocal hook is one of the main things. And, over the years, we've learned how to write songs to translate really good live — songs like 'Edgecrusher', 'Shock'. [On] the new album ['Genexus'], 'Soul Hacker', 'Anodized', 'Regenerate'. You know, those songs have really big hooks in 'em and it's songs that people can sing. And the reason why, I think, each record sounds different is 'cause we take a different approach on each record. For instace, 'Soul Of A New Machine', the band was just starting out. It was our first record, 1992. We sounded more kind of like grindcore meets industrial meets death metal. We put seventeen songs on the record — too many songs. So when we did 'Demanufacture', we learned, 'Okay, we need to [trim] it down. We need to make ten or eleven songs and focus on those ten or eleven songs, and just write better hooks.' We became better songwriters. We also… On the first album, we toured worldwide, and we could see what songs worked better live and what songs didn't work better live. And we found out that some of the faster songs didn't translate well live, but the slower, groovier tracks… And I don't mean 'slow slow.' I mean, like midpaced, groovy tracks with big hooks translates really well live and people love it. But, again, every record we take a different approach, whether it's different production, different people we work with, and just a different writing approach."

On whether it would be better for a band like FEAR FACTORY to have a drummer that sounds like a machine:

Dino: "It's ironic how all that works. I mean, nowadays they do have drum programs that do have live drummers who actually programmed the actual program. You know, they have live drum samples, they have live cymbals that are all in the drummer software. So you can make a machine sound human. And when I say 'human,' I mean imperfect — you can make it sound imperfect, like not perfect. We took that approach on 'The Industrialist'. We used a drum program and we loved it. But some of the fans didn't love it. I don't know why. You know, me and Burt [vocalist Burton C. Bell] were very honest and we said, 'Hey, we're using a drum program for this record.' 'Cause a lot of people were saying, 'Who played drums? Who played drums?' So we used a drum program. And a lot of people didn't like it. So we decided on the new record, 'Genexus', to use a live drummer. But he played to a click track, he played it perfect… It added an element of, yes, 'realness' to it, but we also combined the drum-program element. We edited his drums really tight — even tighter than what he already played it. So it did have a drum-machine feel, but with a live drummer. So I think the combination of the two worked really well. And that's what we've done in the past. So we took that approach again on this record, and it worked out great. But I prefer the drum program; it's less work."

FEAR FACTORY was involved in a bus crash on November 25 while en route to the show in Munich.

FEAR FACTORY's European trek features the band playing the "Demanufacture" album in its entirety. They are also showcasing songs from "Genexus", which came out on August 7 via Nuclear Blast.