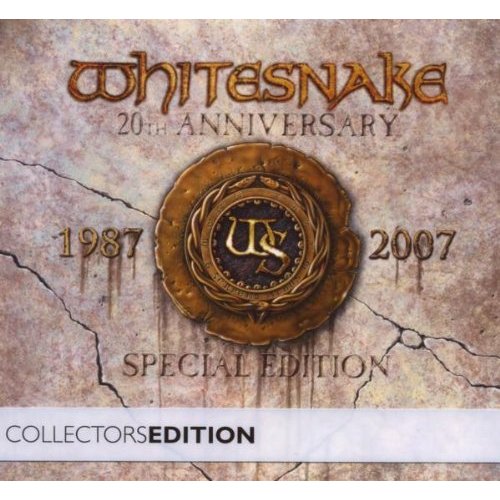 EMI has set a May 31 North American release date for WHITESNAKE's "1987: 20 Anniversary Collector's Edition". This collector's edition CD and DVD, released to celebrate the album's 20th anniversary, is beautifully packaged in a fold-out digipack with PVC slipcase with extensive sleeve notes written by Geoff Barton of Classic Rock magazine.

Originally released in 1987, the album hit No. 8 in the U.K. charts and went on to sell a phenomenal eight million copies worldwide. The LP spawned three hit singles — the LED ZEPPELIN-influenced "Still of the Night", the anthemic "Here I Go Again", and the power ballad "Is This Love". The CD features the original European album (with two more tracks than its American counterpart) and four bonus tracks taken from "Live...In the Shadows of the Blues". The DVD features four videos, all of which got huge airplay on MTV at the time of release — which may have been influenced by the appearance of David Coverdale's then-wife Tawny Kitaen — and four live performances from the "Live ...In the Still of the Night" concert.

* Taken from "Live in the Shadow of the Blues"