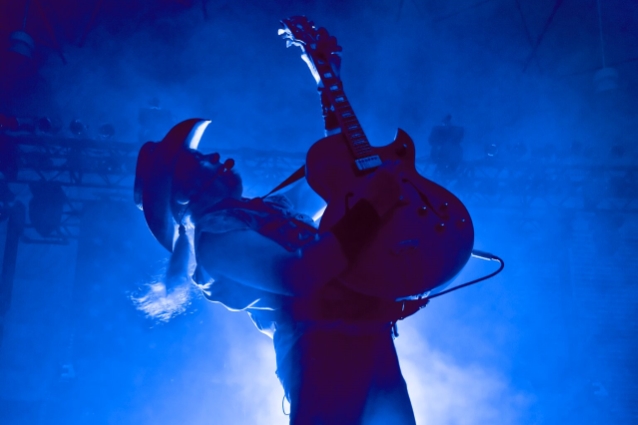 Who Is The Greatest Guitar Player Of All Time? TED NUGENT Weighs In

In a recent interview with Bushnell, legendary rocker Ted Nugent was asked to name the greatest guitar player of all time. He responded (see video below): "There are so many miracle workers on the guitar, and I've jammed with the best. I got to jam with B.B. King. I played bass with Chuck Berry and Bo Diddley. I got to jam with Steve Winwood. I played with Stevie Ray Vaughan. I jammed with Eddie Van Halen and Billy Gibbons. I've been on stage with AEROSMITH, with Brad [Whitford] and Joe [Perry]. I've been on stage with HEART and played with those guys. I jammed for an hour with John Entwistle at the NAMM show in California years ago. I played with Brian May. There's so many gifted virtuosos. Derek St. Holmes, who was with me for years, is one of the greatest guitar players that ever lived. Rickey Medlocke, who was with BLACKFOOT, created incredible music with BLACKFOOT and now with LYNYRD SKYNYRD. Tommy Shaw, my fellow Damn Yankee, is just an unbelievable guitar virtuoso.

"So I've really been to the mountain top. I know that the founding fathers — Chuck Berry, Bo Diddley, Duane Eddy, Lonnie Mack — these guys invented this stuff, so we owe them everything.

"There's just so many unbelievably impacting, musically stimulating adventurous guitar masters out there. I've already named — I don't know, what have I named? Forty of 'em. There are so many that I revere them all.

In a 1987 interview with Guitar World, Nugent called Jimi Hendrix "a master craftsman, a pilot of an emotional roller coaster who came the closest to anyone in the history of the guitar to master the unlimited dimensions of the tonal and lyrical capabilities of the instrument." As for Eddie Van Halen, Ted said the VAN HALEN axeman was "a contemporary leader of the pack with as much impact as any individual guitar player who ever lived — an innovator when innovation seemed to be attacked, an inspiration to every guitar player who wants to take the lyrical interpretation of the instrument beyond its confines." Nugent also weighed in on Yngwie Malmsteen, calling the Swedish six-stringer "a sensational technician — an innovative adapter of classical Baroque into a rock 'n' roll contemporary flash."

Nugent recently confirmed that he is working on material for the follow-up to his 15th solo studio album, "The Music Made Me Do It", which came out in 2018.

"The Music Made Me Do It" was released via Round Hill Records. Ted's first studio album in four years featured Greg Smith (BILLY JOEL, ALICE COOPER, RITCHIE BLACKMORE'S RAINBOW) on bass, Jason Hartless (JOE LYNN TURNER, MITCH RYDER) on drums, and the Motor City Madman himself on lead guitar and vocals.