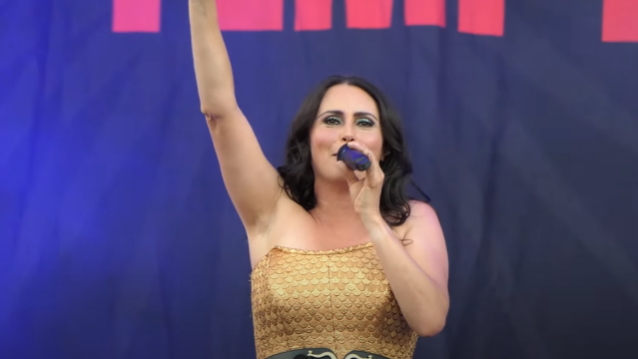 Vocalist Sharon Den Adel and guitarist Stefan Helleblad of Dutch heavy rockers WITHIN TEMPTATION were interviewed by EMP at this year's Summer Breeze festival, which is being held this weekend in Dinkelsbühl, Germany. Asked if fans can expect to hear a full-length album at some point in the future after getting four singles from WITHIN TEMPTATION in the last couple of years, Stefan said (as transcribed by BLABBERMOUTH.NET): "Well, we're constantly working on new stuff, and there's still new songs that's been recorded and everything. But you never know how they're gonna end up — if they're gonna make it or not. But there's definitely a lot of writing and recording going on. And hopefully an album next year — hopefully. We'll see."

Den Adel also discussed the WITHIN TEMPTATION songwriting process, saying: "The thing is we've been around for such a long time that we try to be inspired by new bands that we hear and implement it with our own kind of sound and try to stay updated with the sound that is sounding more modern nowadays and what is more 'in' nowadays. Not to be going along with new sounds but something that sounds refreshing and inspiring to us. And that keeps us going and makes it fun for us to make still music. We've been around almost for 25 years, even longer — now I really feel old — but, anyway, you need it; you need to evolve. So there's no formula, but it's more every time looking what inspires you. And it can be anything."

In recent years, WITHIN TEMPTATION shifted its focus from releasing albums to releasing a series of singles, enabling the bandmembers to indulge themselves in their creative processes thus delivering freshly inspired music. The group has released "Entertain You", "The Purge" and "Shed My Skin", singles that have all thrilled their fanbase, had great critical reception in Europe, peaked in the Top 20 of the U.S. Billboard Mainstream Rock Indicator charts and topped the official German charts. In July, WITHIN TEMPTATION also released the official Jeb Hardwick-directed music video for the band's latest single, "Don't Pray For Me". It is the fourth single of the band's independent releases and will lead up to WITHIN TEMPTATION's next studio album.

Last month, Sharon told Finland's Chaoszine about WITHIN TEMPTATION's plans for a new studio LP: "We don't have an official [release] date yet, but we are working, as we speak still, on finishing songs. And, of course, we have released a lot of songs during the corona time; those songs are gonna be on the album as well. So I think we have to finish up, like, a third still, and we're gonna do it in the beginning of next year. And somewhere next year we will release a new album — with the songs that we already released, of course."

The remainder of WITHIN TEMPTATION's 2022 will be filled up with a European summer festival season, a USA tour with IRON MAIDEN and a much-anticipated and long-delayed co-headlining European tour with EVANESCENCE.