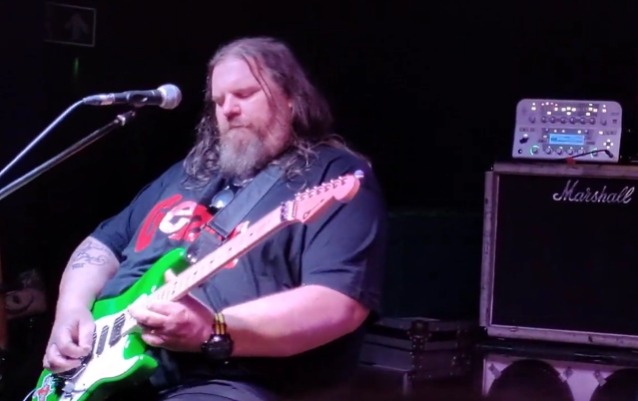 WOLFSBANE guitarist Jason "Jase" Edwards has been diagnosed with multiple myeloma, a bone marrow cancer that there is currently no cure for.

The long-running British hard rockers broke the news of Jason's diagnosis in a social media post on Monday (August 1). They wrote: "As you all know, Jase played the Genius Tour with a fractured vertebrae. We actually found out in the van on the way up to Edinburgh! With no impact or injury, he's been having tests to ascertain the cause.

"It is with deep regret we have to inform you that Jase has been diagnosed with multiple myeloma," they revealed. "This is a bone marrow cancer that there is currently no cure for. It is however treatable. He started his first cycle of chemotherapy within 2 weeks of the tour ending and will hopefully go on to have a stem cell transplant in around 4 months' time.

"This has come out of the blue and is a massive shock to us all!

"He is mostly fine in himself and is looking forward to spending more time in the studio."

WOLFSBANE's first album in a decade, "Genius", was released in June. The artwork for the LP was designed by Simon "Mackie" Piasecki, who also created the covers for WOLFSBANE's 1990 EP "All Hell's Breaking Loose Down At Little Kathy Wilson's Place" and 1991's album "Down Fall The Good Guys".

WOLFSBANE burst out of the Midlands in the mid-1980s, signed to Rick Rubin's Def American label in 1989, built up a massive following of (self-titled) "howling mad shitheads" (HMS) and released three raucous albums before imploding in 1994, when Bayley joined IRON MAIDEN.

WOLFSBANE reformed in 2011 to record its first studio album for 17 years, "Wolfsbane Save The World", released in January 2012 to huge acclaim.

As you all know, Jase played the Genius Tour with a fractured vertebrae. We actually found out in…