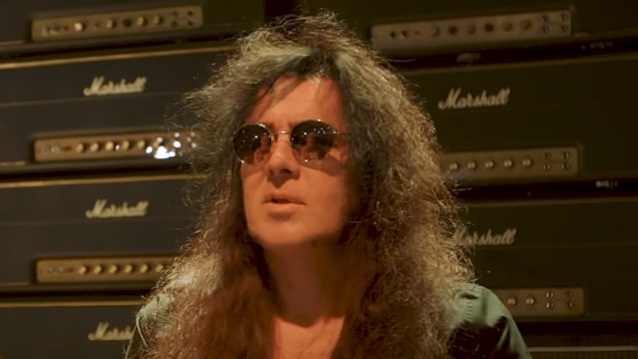 YNGWIE MALMSTEEN: 'I Never Rest On My Laurels'

Swedish guitarist Yngwie Malmsteen was recently interviewed by Sweetwater's Nick Bowcott (former guitarist of GRIM REAPER). The full chat can be seen below. A few excerpts follow (as transcribed by BLABBERMOUTH.NET):

Yngwie: "I listened to all those blues records. They were great — Clapton, John Mayall. Then eventually I heard GENESIS with Peter Gabriel, and I didn't really understand the difference then, but something struck me about the inversions and the diminished chords... they weren't as bluesy, and I loved it. I found out, that was very baroque-influenced. My mom had a lot of Bach records, and Vivaldi, and so on, so I started listening to that. I still love the Marshall stacks, and I still love my electric guitar, but I like to [mix it with] the melodic content of baroque classical music."

On how he developed his speed and accuracy:

Yngwie: "Initially, it was insane — basically, all waking hours. I would sacrifice everything. I wouldn't go to school. Then when I was a teenager, they had to drag me to parties and stuff like that because I was extremely dedicated, to the point of insanity I think. I was waiting for the bus, walking to my mom's house from the bus station, with a guitar. It was freezing cold. Get on the bus, 15-minute ride, the guitar would come out of the case. I would play it for 15 minutes. Come to the train station, put the guitar in the case, go onto the train for 45 minutes, the guitar came out again. I would play 45 minutes going into the city, and go straight from the station to my studio and sit there until last train came home."

On his backline, which features dozens of Marshall amplifier heads and cabinets:

Yngwie: "If you go to outer space and look down on the earth, there's two man-made objects you can see — you can see the Great Wall of China, and you can see this wall right here."

Yngwie: "The most important thing — and this is what I'm telling my son — the industry will tell you you should do this, or your friends will tell you you should do that, or the press will tell you. Sometimes you get good stuff; sometimes you get really bad stuff. You should never get affected by either one, because the most important thing is you find what you love, and you do that, and you totally ignore everything. You cannot be worrying about what other people think. You have to be sure that what you do is what you love to do, because if you love it, maybe another hundred thousand people might love it too. Some other people might not like it, but it doesn't matter, because you have to express what you want to express. You only live once."

Yngwie's previous U.S. trek marked his first run of dates in the States since 2016 when he took part in the "Generation Axe" tour alongside Steve Vai, Zakk Wylde, Nuno Bettencourt and Tosin Abasi, playing to more than 70 thousand people over 27 shows.