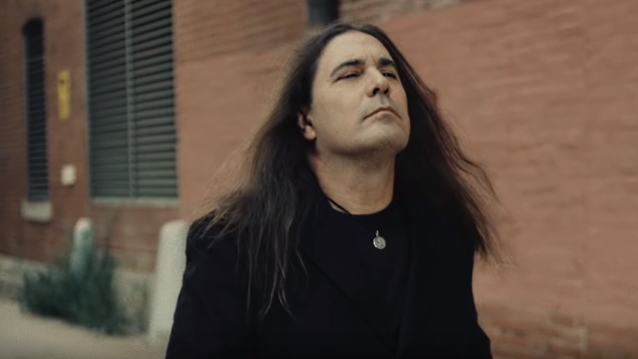 ZAK STEVENS On 'Idle' CIRCLE II CIRCLE: 'We're Trying To Figure Out The Next Step, If There Is One'

On his new project, ARCHON ANGEL:

Zak: "That was kind of one that came out of nowhere. I got a surprise call, I think, [at] the beginning of last year or maybe the end of 2017. I had worked with this guy, Aldo Lonobile, the Italian producer. He got into some producing with his own band SECRET SPHERE... He worked with AVALON, Timo Tolkki's side project. I sang a couple of songs on those AVALON records, and it was being produced by Aldo, so that's how I met him. I think it was the label's idea to say, 'Hey, you guys work real good together. Would you consider writing some songs together?' At the beginning, it was a project, and then it turned into a real band. We just got a team of good people — he had a couple writers on his side; my wife Kate, she writes great lyrics; and I think I did a song and a half. It worked out good. It gave me the chance to just really focus on vocals. With CIRCLE II CIRCLE, I was writing all the lyrics and stuff, and it's not bad, but I wanted to get some new insight. Kate came up with a lot of the conceptual stuff for the record — the title, the [band name], the concept behind it... Aldo said, 'That sounds good to me,' so he got a couple of dudes on his side, and we recorded it between Italy, and I did my vocal tracks in Jackson, Michigan, where I'm living... It worked out well. Everybody collaborated well together, so we're going to see what happens. I think people will dig the tunes when they come out."

On how TRANS-SIBERIAN ORCHESTRA prepares for its annual winter tours:

Zak: "We practice both bands in Omaha — actually, across the border in Council Bluffs, Iowa. We set up both bands there. That's where the West has their first show. We put both bands in there because it has to be a mirrored show. Everything's exactly the same. That's where we practice for a couple of weeks. We start in the practice rooms, and [then] we take it to the big stage and sync up the East and West band to be as exactly the same as we can get... Each [touring] company has about 55 shows in about six weeks. It's kind of a brutal little run, but everybody just tries to stay healthy. That's the main concern — just try to stay feeling good, and if that's the case, we'll be able to have a great show every night."

On his favorite musical memory:

Zak: "I really look back at that first tour I ever did with SAVATAGE. It was with OVERKILL in '93 in Europe. Just going to those big clubs and filling them up every night. Plus, we had the single 'Edge Of Thorns' playing on the radio back home — a lot of spins... I couldn't go to the grocery store. Get back in the car, 'Edge Of Thorns' is on. It was amazing."

On the future of CIRCLE II CIRCLE:

Zak: "We don't really know. We had 13 years and seven records, so there's quite a long — a little bit over a decade of history. We have that. Then it got to the point of, 'Where do you go from here?' That's the part we're still trying to figure out. There's been no decision to say, 'This is completely over.' In music, we never really say never, because you might think something's one way, and then it can be different. We're basically idle right now, because we're still trying to figure out the next step, if there is one... I really don't have a definitive answer."

On SAVATAGE, which reunited after a 13-year hiatus for the 2015 Wacken Open Air festival but hasn't performed since:

Zak: "You've always got SAVATAGE lurking out there that we really don't know for sure either. Basically the same answer that I get from them is what I'm giving for CIRCLE II CIRCLE — 'You know what? It's not ever gone, but we just have to figure out what [to do], and the answer will come.' When the right situation appears, that's when I think things will happen... It needs the right thing to come along. I like the fact that TSO has five SAVATAGE songs in the last half of the set this year, so something's brewing... I don't really have any more answers after that, but something seems like it's going on. We're going to find out one way or the other at some point, but the right situation has to come along, I think."

Stevens joined SAVATAGE in 1992 and appears on four of the group's albums — "Edge Of Thorns", "Handful Of Rain", "Dead Winter Dead" and "The Wake Of Magellan". He has also appeared on multiple recordings by TRANS-SIBERIAN ORCHESTRA, a group with which be began touring in 2015.

CIRCLE II CIRCLE was active from 2003 until 2015. In that time, the group released seven studio albums and an "official bootleg" live album that featured the band performing the majority of "The Wake Of Magellan".

ARCHON ANGEL's debut album, "Fallen", will be released on February 14 by Frontiers Music Srl. The group will make its live debut on the upcoming 70000 Tons Of Metal cruise.