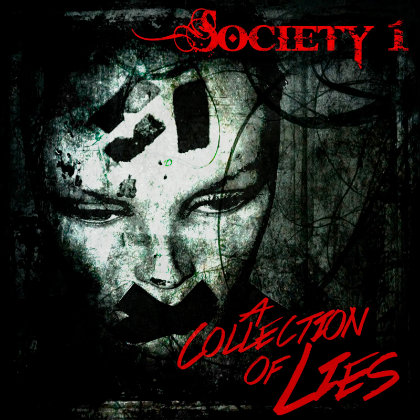 A Collection of Lies

Matt "The Lord" Zane has always been a leading counterculture figure. A shrewd multimedia maverick whose repertoire includes music, acting, spoken word and video production (including porn, of course),Zane turned heads with his famed flesh suspension act as the jaw-dropping dimension to SOCIETY 1's balls-out stage performance. Having once broken Criss Angel's time record for hanging with meat hooks through his back, Zane turns his focus back to music and SOCIETY 1, following a momentary quietus of the band. It's been three years since "A Journey from Exile" and the return of guitarist Sin Quirin (who had long been hanging out with Al Jourgensen and MINISTRY) in supplement of Beau Ashley onstage bolsters the release of SOCIETY 1's latest album, "A Collection of Lies".

Also featuring Dirt Von Karloff on bass and drummer Iorten Mitev, "A Collection of Lies" is a compilation of previously-unreleased songs and B-sides. Hardly filler or gimmick material, this is perhaps SOCIETY 1's true moment of glory, at least from a songwriting standpoint. Matt Zane has taken his experiences and reputed professionalism to refine SOCIETY 1 into a vastly-improved beast. Moreover, Zane's terrific vocals are the big story why "A Collection of a Lies" succeeds as well as it does.

"Lifeless" rages out with heavy tones and Zane's hollering in tandem to all the agro blasting around him. Always threatening to rocket away, "Lifeless" strains its raking tempos before skidding backwards and Zane excites with a new serenading pitch he's not yet revealed from his repertoire. Changing flavors altogether with the chunk rocker "I Got You", Zane wisps through the verses plugged with lobbing bass, nudging guitar riffs and buzzing electro blips. DV Karloff takes center of the slow cooker, "She's Dead", while Beau Ashley practically sings his guitar in shadow of Zane.

"Never Be One" capitalizes on the earlier vigor of "Lifeless" by peeling out and tearing away as the fastest number of the album, even with a pullback in the middle section. "All My Pain" then retreats to a slither and creates intrigue with Matt Zane's settled vocals and a dialed-back chord progression between bass and guitar that soon picks up in intensity. Zane confidently swoons with uncontaminated singing, raising octaves as accents and stresses with impressive punctuation.

Toughening up his pipes on the clammy "As You Go Down", Zane still maintains a pure cadence that would fit snugly in any rock band, much less his own. Beau Ashley throws in a wicked mini solo after the first chorus and he shrieks his frets all over the outro of the sex-driven hump number.

For those SOCIETY 1 fans keener on Zane's bellowing, they'll be satiated by the loud and menacing "I Will Dominate". "I Will Dominate"'s slow-rolling chords are killer, while Iorten Mitev's clattering drums dictate the shifting paces between crawl and stomp. DV Karloff's bass is monstrous behind Zane's woofing and "I Will Dominate" is sure to send SOCIETY 1's live audience into a frenzy when performed onstage.

Zane's pipes once more dip and whisper throughout the proto slinker, "Hard to See", a number carrying nuances of TYPE O NEGATIVE. Hitting a climax with SOCIETY 1's clumping tempo and swinging chords, Zane hits some terrific high notes in response. Zane throws his listeners more surprises with his high-pitched murmurs on the dark ballad "Open Cries" and chamber cello accompaniment to open and close the somber "Scream Out Your Breath". The latter song again reveals depth and maturity in Zane's singing and it treads into TYPE O turf without ripping them off.

This album marks Matt Zane's most passionate performance yet in SOCIETY 1 and the astute plotting of the album makes "A Collection of Lies" the band's most artistic achievement. Even by loading the back end of the album with slower, skulking numbers, the structure and execution of them keeps them interesting. Zane's sex 'n metal collision "Radium" DVDs were a clever mash-up that showed the man's always thinking outside (or, rather, inside) the box. "A Collection of Lies" proves his thinking has come miles, even as SOCIETY 1 grinds out perfect grooves to crank one with, take that as you will.