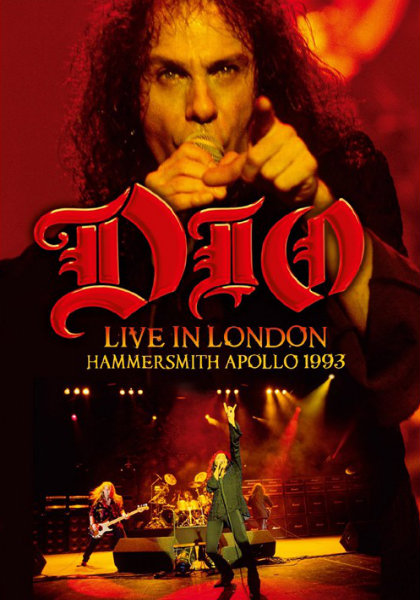 The late Ronnie James Dio found himself at a sort of crossroads in 1993 when he released his "Strange Highways" album. It followed Ronnie and Vinny Appice's brief reunion with BLACK SABBATH that culminated in the "Dehumanizer" record and a subsequent tour, stalling afterwards until years later when all came together a final time as HEAVEN & HELL. Appropriately titled, "Strange Highways" arrived on the heels of reported discord with Jimmy Bain. The album was met by American diehards only, given the abrupt change in the rock climate from heavy metal and hard rock to grunge. In his home country, Dio found himself playing more clubs than the sprawled venues he'd been accustomed to with RAINBOW, SABBATH and of course, his own band through the "Dream Evil" album.

You wouldn't be able to tell Dio had anything amiss within his realm by watching "Live in London: Hammersmith Apollo 1993". The UK faithful packed the hallowed halls and gave Ronnie all the public verve he needed to grind out a concert loaded with fan favorites and pocked with six selections from "Strange Highways", those being the title track, "Evilution", "Pain", "Jesus, Mary & The Holy Ghost", "Hollywood Black" and "Here's to You".

Dio and Appice at this time were surrounded by DOKKEN bassist Jeff Pilson and then-rising guitarist Tracy Grijalva (a.k.a. "Tracy G"). Pilson landed the gig by living in proximity to Appice and Dio. DOKKEN, running their own ruts to stay alive, freed him up to roll with the DIO band. It's Pilson who appears to be reveling the most in his tenure with Ronnie and Vinny. Adorning himself with a baggy black shirt with shock-colored wraiths, Pilson headbangs and flails himself like a rag doll all over the Hammersmith stage as soon as the band rips into "Stand Up and Shout" at the beginning of the set.

Leading off "Strange Highways" with a knuckle-down bass plod, Pilson surrenders the epicenter to Ronnie, who assumes all of the elements around him, asserting his electrifying aura like the mystic he was. Ever the quintessential professional, Dio rallies his stripped-sounding band into a whirling rendition of "Don't Talk to Strangers" that captures the English audience. No matter how raw the band comes off in the set, the bond is locked between all participants.

Tracy G and Jeff Pilson frequently flash-check Vinny Appice for his veteran guidance. Appice doesn't just pilot the tempos of Ronnie's sets; he's as much a directorial force as Ronnie himself. Appice's drum solo in this set needs a little extra kick, however, which Pilson and Tracy G supply him with external riffing. Pilson is given the chance to freestyle after Appice and he kills it. This, in the midst of a BLACK SABBATH and RAINBOW medley strung through "The Mob Rules", "Children of the Sea", "Heaven and Hell" and "Man On the Silver Mountain" with DIO's own "Holy Diver" mashed in-between.

As much as this concert is yet another showcase for Ronnie Dio, Jeff Pilson proved he was well malleable in heavying-up his chops. He and Tracy G might not be the most prolific team to grace the DIO court, but the songs on "Strange Highways" were sturdy and Pilson especially made the moment, on-record and onstage. Tracy G must've felt sheer intimidation trying to take on Ronnie's live repertoire. The G Man shreds instead of ebbs Tony Iommi's solo on "The Mob Rules", which is a good bit of improvisation, but Grijalva shines best on his madcap notes and peals on "Evilution".

"Holy Diver" is less dense in this show than fans are accustomed to, while "Heaven and Hell" is delivered just a click behind its normal strut. The Hammersmith audience in 1993 (including some brave chap wearing a Robert Palmer tee in the front row, of all things) are enchanted nonetheless. Pilson and Appice carry the main march nicely, while Ronnie momentarily slips into a trance before giving Hammersmith the goods.

As with much of the show here, "The Last in Line" is sent out rare at times, yet it remains one of the highest points of any DIO performance and Ronnie hurls it out with every lick of passion he has, no matter how times he performed it during his lifetime. "The Last in Line" is that iconic metal communion between Dio and his fans, while "Rainbow in the Dark" on its heels is a metal hymn built to stand eternity. Not that Ronnie James Dio was a religious person, but his shows were undeniably considered church for metalheads.

The vacancy of Dio's pulpit still stings, but watching him smile as Jeff Pilson gouges out an amp stack with his bass neck at the end of "We Rock", then deferring to his fans with the end salutation of "Here's to You", it's no wonder the man was so loved. As a bonus feature to this DVD, the "Hangin' With the Band" segment will touch many souls, in particular Ronnie's interview while getting made up where he mocks band turmoil by outlining his show itinerary to conclude with "fighting, stealing each other's wives and dancing on each other's graves". Here's to you, RJD.